Today's Tory scandals there'll be f**k all repercussions from

CAN’T keep up with the huge number of government scandals? Don’t worry, here are today’s acts of parliamentary misconduct that the Tories won’t be accountable for.

Reports of a company Matt Hancock has shares in winning two NHS contracts worth £300,000 won’t even feature in the ‘and finally’ section of the news, which will be about a cat that can ‘use’ an iPad. Curiously, Hancock’s Topwood company is dedicated to shredding documents. That’s not suspicious at all. Next.

There will be minimal fallout from this because it’s too boring to be gripping. People’s eyes will simply glide off the page as they try to read an expose about David Cameron lobbying for a firm he advises. Makes you long for simpler times, like when he put his knob in a pig’s mouth.

A landmark court ruling which found that Priti Patel’s immigration detention centres breach human rights rules will pass unnoticed as Prince Philip’s funeral clogs up the media. Although for many people, this is exactly what they voted for, so hoorah for Priti for being even nastier than they had hoped.

While this technically hasn’t happened yet, it’s only a matter of time until Gove legalises ching as long as you patriotically snort it off a Union Jack. The Tory party will then rally round and laugh off toothless questions about the whole affair from the handful of remaining state-approved journalists.

A leaked phone call of Johnson giving Trident captains the green light to nuke Scotland will see his popularity soar in the next poll. Rather than being the prime minister’s political downfall, this horrific incident will be celebrated, or somehow get blamed on Keir Starmer. You’ll forget about it by tomorrow.

Dads deciding what custom-made hearse they'll have for their funerals 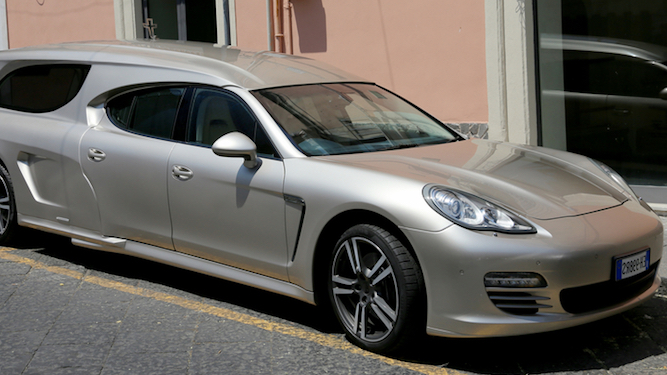 FATHERS across the country have seen the custom-made Land Rover hearse for Prince Philip’s funeral and begun planning their own.

Men who had previously taken no interest whatsoever in their funerary arrangements have suddenly begun to sketch out ideas after realising a car can be involved.

Nathan Muir, 53, said: “I’d always said you could throw me in a skip for all I f**king care. All that’s changed now.

“The Duke of Edinburgh’s last gift to his people is demonstrating that funerals, like weddings, can be made interesting to men by adding an automotive element.

“Personally I’m going to my final resting place in my first car, a 1978 Austin Princess with the estate car conversion and a fully-carpeted luggage area.”

Bill McKay said: “My funeral will reflect the man I was in life, which is why the coffin will be carried in relay between a Corvette Stingray, an Aston Martin DB7, and a Ferrari Daytona Spyder.

“Yes, I currently drive an 18-year-old Vauxhall Corsa with rust issues and a non-functioning handbrake, but that’s not the point.”