DAVID Cameron has pledged to take the Conservative Party back to its mentally disturbed basics.

In response to the UKIP Surge, the prime minister insisted he had ‘got the message’ and would now walk around with a combat knife clenched in his foaming jaws.

Mr Cameron added: “Most UKIP voters used to support the Conservatives. Or, perhaps, one of the other right wing parties Anyway.

“We used to welcome candidates who would strip to the waist and photograph themselves in front of a Union Jack. Or use an incredibly dangerous dog as their Facebook photo.

“In our pursuit of the middle ground we decided that these people were strange and frightening and way, way too angry about an enormous number of things.

Mr Cameron is to unveil a series of policy initiatives to win back UKIP voters including making everything legal, except gay marriage and uncontrolled being foreign.

He added: “I am a Knight of the Holy Order of St George, vanquishing our foes with the Invincible Sword of Albion.

“Is that the sort of thing you’re after?” 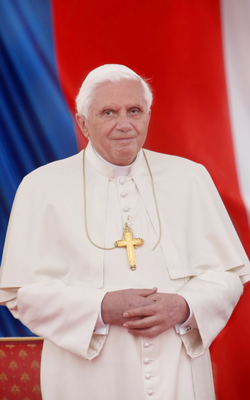 EX-POPE Benedict is seriously getting under peoples feet at the Vatican, say cardinals.

The 86-year-old first reappeared shortly after his resignation claiming hed left some old copies of Mojo somewhere in the basilica.

Cardinal Roy Hobbs said: I came to work one morning and he was in St Peters Square, claiming he was walking his dog.

“When I enquired where his dog was he just laughed awkwardly and asked whether I needed anything blessing.

He was wearing papal robes made from a bed sheet and his mitre was a corn flakes box hed painted gold and written pope on.”

Staff have set up a desk with some discarded papal bulls near the Sistine Chapel to keep him occupied. But Benedict continues to interrupt guided tours, telling visitors the Vatican nowadays is basically a homosexual disco club.

Hobbs added: “He seems a bit down which is pretty weird when you consider he’s a rather old man who believes that death is a permanent vacation to the best place ever.

“Really he needs a hobby, either jigsaws or maybe another religion.”