GORDON Brown will remain prime minister if the Conservatives win the next election, as the party launches a new campaign to make itself completely and utterly pointless.

Shadow chancellor George Osborne said that, if elected, a Tory administration would also retain the current Cabinet, including Douglas Alexander, and continue to pursue all its ideas and policies for the duration of the first Parliament.

He added: "This is the culmination of more than 10 years of hard work. William Hague laid the groundwork, Iain Duncan Smith made an invaluable contribution and Michael Howard was a creepy bastard.

"Under the leadership of David Cameron the Conservatives can now look the British people in the eye and say that we are ready to govern in exactly the same way as the Labour Party."

He said that after a Tory victory Mr Cameron would have a seat in Cabinet so he could offer an encouraging thumbs-up to Gordon Brown and say "you go for it big guy" at the end of every meeting.

Mr Cameron would also provide tea and coffee making facilities, as well as a choice of continental or full English.

In addition Mr Cameron would offer Gordon Brown a range of massage options including a soothing shoulder rub during tense Cabinet meetings and all-over tone and relax with essential oils and an Enya CD.

Mr Osborne said: "David will wear white overalls and Gordon will have to keep one of those little towels over his 'no-go area'. But apart from that he is quite willing to rub him all over." 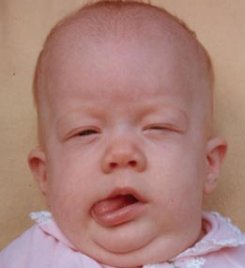 ILLEGAL American pit bull terriers are being smuggled into Britain disguised as incredibly ugly children, according to customs officials.

Criminal gangs have developed increasingly sophisticated methods to evade the authorities. Earlier this year a smuggler tried to pass through customs carrying a pitbull with a handle glued to its back, claiming it was a novelty briefcase.

The dogs, banned in the UK since 1991, are used as a warm-up act before toddler fights.

Roy Hobbs, deputy director of HM Revenue and Customs, said: "We've lost count of the number of times we've challenged a young mother, accusing her of attempting to smuggle a pit bull, only to discover that it was in fact an incredibly ugly baby.

"I mean, just horribly ugly. I'm talking 'Hills Have Eyes' ugly. So ugly you wonder if it's some kind if bizarre hybrid.

"You look at the mother and think to yourself, 'she's actually not that bad' so the father must have been some kind of scientific experiment gone wrong.

"Anyway, the point is we can't tell the difference and not surprisingly the mother can get quite upset when we tell her that her child looks like an illegal dog."

Officials say babies should no longer be classed as hand luggage and anything that looks like a baby will have to be dropped into a large perspex bin before passing through security.