Tories Publish First Ever Hard-Back Edition Of The Daily Mail

THE Tories will today present their vision of a Britain made-up of self-reliant people with greater control of their own lives who don't like all them Afghans coming over here and stinking up the place.

The party's manifesto will set out plans to build a society of self-governing racists who will finally be able to get on the housing ladder 'cause all them fuzzy wuzzies have been stopped at Dover and thrown back into the sea.

The party has described the 130-page hard back document as an 'invitation to join the government of Britain as long as you were born here and are willing to forego the £190,000 salary and all the free food'.

Tory deputy chairman, Julian Cook, said: "We thought long and hard about the contents of this manifesto and got absolutely nowhere. Eventually we just phoned up Paul Dacre at the Daily Mail and wrote down everything he said."

He added: "As a politician I'm not very interested in policy, but it's mainly stuff about shoving health and safety officers into a vat of boiling tea and sending all the Gypsies back to Gypsania.

"And hopefully Mr Dacre won't notice the bit where we say a few nice things about the homos."

Meanwhile the party's 'people power' agenda includes a plan for directly-elected local police chiefs, raising the prospect of law enforcement being placed in the hands of Kerry Katona and whatever half-pissed, petty criminal happens to be blowing his muck up her at the time.

The manifesto also promises a series of endless local referenda organised by complete and utter maniacs in a bid to destroy the country before it can fall into the hands of a load of sweaty foreigners and their thieving children.

The Tories' sombre and austere Daily Mailogram contrasts sharply with the cover of the Labour manifesto, published yesterday, which depicts an optimistic British family looking forward to a new life in the Dordogne. 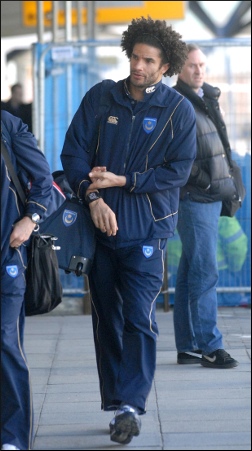 ADMINISTRATORS at Portsmouth FC are to sell off the club's FA Cup final places to the highest bidder.

Prices start at £8.50 for the chance to sit on the bench as a reserve goalkeeper wondering exactly what David James has to do before you get a game

For £25 the winning bidder will take the place of manager Avram Grant, including the chance to spend the second half flicking through the jobs section of the Portsmouth Advertiser and reeking of Thai massage therapist.

Aston Villa's Emile Heskey was among the first to register an early bid of £18 for the position of centre forward.

He said: "It's always been my dream to be in the final of a competition other than Footballer Of The Year Most Likely To Fall Over And Bundle The Ball Into Touch Whilst Still In The Changing Room."

Heskey will place any subsequent bids by phone as organisers fear that if raises his hand during the auction it would almost certainly start a chain reaction which would end with him toppling head-first into a collection of Ming vases.

Administrator Martin Bishop said: "This is a fantastic opportunity to take your place among a team that has for much of the season consisted mainly of amputated body parts and bruised fruit.

"I'm sure a Portsmouth-Chelsea cup final will be a thrilling, visceral occasion – much like watching a pack of hyenas devour the last remaining shreds of an elderly, bankrupt gazelle."