CONSERVATIVES are wearing Corbyn-themed merchandise to disguise their identities on the streets of Manchester.

Tory conference attendees have been spotted wearing Leninist caps, Momentum badges and threadbare cheesecloth shirts, with some even blasting grime music from their mobile phones in an attempt to go unnoticed.

A Tory source said: “If I have to choose between my safety and my style, so be it. Which is why I will be wearing these loose-fitting sports trousers and a t-shirt bearing the phrase ‘Oh Jeremy Corbyn’ whenever I’m out in public.

“Whoever decided that we should bring our party to this godforsaken northern hinterland should be flogged.” 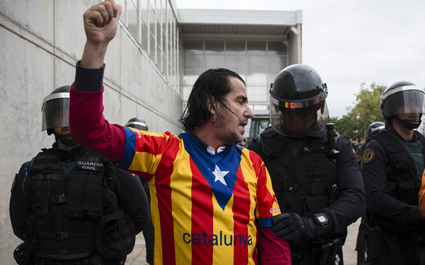 THE Spanish government has announced further plans for totally ballsing up for no reason, it has been confirmed.

Amid scenes of chaos and police violence, the Spanish government has said this is just the start of their plans to totally bollocks up this whole Catalan referendum thing.

Spanish PM Mariano Rajoy said: “The most responsible and democratic thing to do when confronted with a region’s desire for independence is to declare it illegal, throw people in jail and start cracking skulls. That’s just democracy 101.

“But after that, we’re thinking about shooting protesters with rubber bullets, attacking firefighters and telling them that they can’t have ‘El Clasico’ any more if they leave.

“What? We’ve already done all those things?”

“Well then yeah, we’ve done all we can to balls this situation up at this moment in time.”

Catalan Josep Alcaniz Matoses added: “I actually wasn’t sure about us being independent from Spain.”

“But seeing as they’ve said it’s illegal for me to even have a choice and the police are going to kick our heads in for even wanting to, they’re really making the decision for me.”