MANY Brexit supporters are confused by Boris Johnson’s negative comparison of the EU to Nazi Germany, it has emerged.

A considerable number of anti-EU voters have a certain fondness for Hitler due to his robust right-wing views and frequent appearances in interesting television documentaries about the Nazis.

Office manager Roy Hobbs said: “I’m strongly opposed to the EU and will be voting to leave, but I don’t see why we have to drag poor old Hitler into it.

“Hitler did some bad things, but it’s not his fault the EU has made Britain literally full of immigrants and shopkeepers have to fill in 20 forms to prove their bananas aren’t too bent.

“In fact he’d have been opposed to a left-wing organisation like the EU and would have crushed Brussels with Stukas and panzers. We should be able to vote for that in the referendum.”

Caterer Nikki Hollis said: “It’s disgusting that Boris is smearing Hitler’s reputation by comparing him to the EU. He’s not even alive to defend himself, although in fairness that is due to the war he started.

“Hitler was better than the EU anyway because he’d got flying saucers and went to the moon. Boris needs to get his facts straight.” 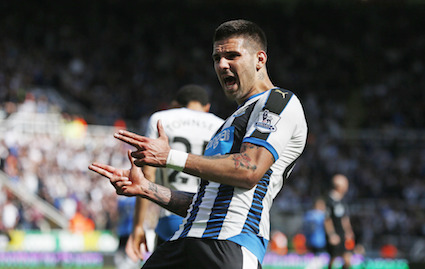 Following reports of something resembling optimism among supporters, the club dispatched its 11-man hope-disposal squad to lay down on the Newcastle pitch.

Manager Mauricio Pochettino said: “The main thing is that no Arsenal fan’s pride was hurt and we managed to get our fans out of the stadium as quickly and quietly as possible.

“I’d also like to thank the players for ending the season in such a calmly inept manner.”

It has been confirmed the suspiciously high level of optimism had been left behind in February as part of a training exercise in winning the league.

Questions are now being asked as to how it could have stayed in people’s minds for this long unnoticed.