Wendy Alexander Goes To Toilet By Herself

THE Scottish Labour leader Wendy Alexander was celebrating last night after going to the toilet all by herself.

It is understood Alexander got down from the table after dinner and walked purposefully across the hall to the downstairs lavatory.

According to friends of the Labour leader, she pulled down her trousers and pants, climbed onto the seat, steadied herself and then did both, 'a pee and a poo'.

Labour activists in Scotland hailed yesterday's movement as a major step forward for the party, although Alexander did require some help with wiping.

It is the first time the Scottish leader has gone to the toilet unaided. Last year she got half way across the hall and was already pulling down her pyjama bottoms, before falling over and soiling herself in what  one witness described as a 'spectacular explosion'.

Meanwhile Ms Alexander's brother, Douglas, the international development secretary, has recently moved on to Pampers Easy-up Pants and hopes to be using the toilet independently by the end of July.

"It is for her to decide when and how she goes to the the toilet. We wish her luck and hope her new found confidence does not result in shit all over the floor."

Fat Guys Told To Put Their Tits Away 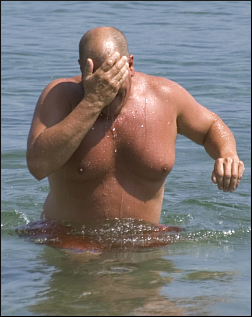 FAT men are being urged not to bare their breasts in public this summer, as it emerged they were not attractive to women after all.

Nikki Hollis, beauty editor of Gas! magazine, said male breasts had become a common sight in the high street in recent years due to the total collapse of all moral standards and high levels of beer.

She urged men to look at themselves naked in the mirror before going topless and to avoid disrobing in the presence of children and horses.

Hollis said: "We’ve had three days of sunshine and the town looks like it’s hosting a convention of middle-aged Brazilian transsexuals – in trainers.

"Whatever gave you the idea when you got up this morning that I would want to clap eyes on your wobbling white tits, you great whale?

"I’m sorry to disappoint, but the sight of your sagging boobs does not make me want to rub Ambre Solaire into them and then stick my hand down your shorts. It makes me want to puke.”

Nick Oakland, a 36DD from Essex, said he was shocked to discover how many women were raving lesbians these days.

He said: "I’m a big hunk of beautiful meat. Big up top, and big down below. They just can’t handle it."