'Shut the f**k up' mutters MP listening to elderly voter

A LABOUR MP who felt he should listen patiently to the concerns of an elderly constituent is deeply regretting it.

Martin Bishop, MP for Belsham in Lancashire, earnestly tried to find out why local voters like Norman Steele had rejected Labour in favour of Boris Johnson, but emerged none the wiser.

Bishop said: “I sat down with Norman in a pub. After three minutes I had to explain to him why we can’t bring back the birch for immigrants, legal or otherwise. In vain.

“There then followed some surreal nonsense about children having transgender lessons instead of maths and one-legged lesbians in North London. I think he might have got that from Richard Littlejohn.

“After 20 minutes of this I accidentally muttered ‘shut the f*ck up’ under my breath. Luckily Norman didn’t hear me because he was shouting about Labour supporting the IRA.

“I’d really hoped to take on board the genuine concerns of disaffected voters, but all I learned was that I desperately wanted to take off a sock and stuff it in his mouth.”

Steele, 78, said: “Even though Martin’s a Labour communist, he did seem to be listening to me. I’m not going to vote for him though. Because of Merkel and gays.” 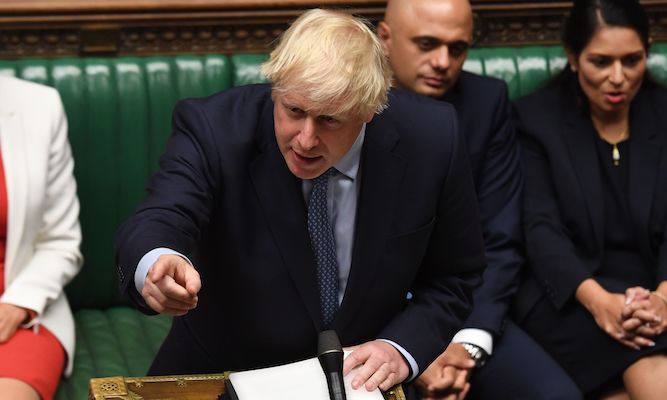 BORIS Johnson passed his Brexit bill when nobody was paying any attention. What else will he try and slip past?

Nothing to do with buses or trains, this update to the Transportation Act of 1717 will allow Britain to start shipping convicts to Australia again for crimes as diverse as sheep-stealing, persistent benefit claiming or suspicion of socialist sympathies.

Allows the owners of the most expensive houses in an area to decide which residents they would like to evict and permanently ban. Gentrifies, raises property values, and makes safe Tory seats even safer.

The Transatlantic Accord act

Any British laws which are not in accord with US laws, for example on gun control or taxation, will be phased out. Disagreement is officially unpatriotic and will be punished with on-the-spot fines.

Everyone has a nose, so what could be fairer than a tax on all noses? It’s not disproportionately hurting the poor or anything. And if you don’t pay it you lose your nose. You can’t say you weren’t warned.

Grants referendums to Scotland and Northern Ireland, but with every vote for independence counting for three times more than a vote against. Will get rid of troublesome bits of the UK and ensure a permanent Tory majority until the end of time.