Theresa May covered in tags

According to a new report, offenders are circumventing their curfews by surreptitiously slipping their tags onto boring people who don’t go out of an evening.

Tory politicians are apparently a prime target for the tags, as are agoraphobics, librarians, members of historical re-enactment societies and anyone who has reached level 80 or above on World of Warcraft.

The Home Secretary only realised she had been a target when police officers raided a Conservative fundraising event searching for sixteen juvenile car thieves. It is now believed the teenagers fixed their tags to May after diverting her attention with a plate of raw meat.

May said: It was very embarrassing for my guests; respectable businessmen and newspaper proprietors who for some reason were convinced the police had come to arrest them.”

The incident comes shortly after a team of 20 officers flew to the West African country of Togo chasing a gang of street thugs who turned out to have attached their tags to the sparrow-like migratory tree pipit.

May also announced a plan to monitor UK internet use which assumes that any users who dont access pornography are fanatical Jihadis and automatically passes their details to anti-terrorism units. 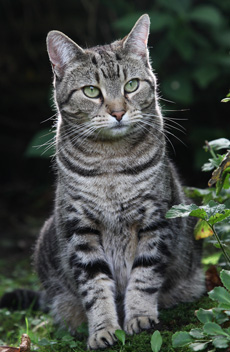 A feline perspective on the latest cinema releases, by cat Martin Harper.

I’ve been trying to get into Prometheus (15) for weeks but the cleaners keep chasing me out. I bet Peter Bradshaw doesn’t get harangued out of screenings by an overweight woman with a hare lip and a broom. Anyway I finally had success this week after nine hours of waiting by the screen door, purring. The film itself is quite confusing. Something about Noomi Rapace getting spayed with a lazer coupled with some musings on the origins of mankind, which it’s hard to care about when you’re a cat. I found a pair of discarded 3D glasses on the floor but they were much wider than my head so I could only look through one lens at a time, which didn’t seem to have the desired effect. I went to sleep twice although I don’t count that against the film because I like sleeping.

There’s another film out called Fast Girls (12A) about some human females that like to run EVEN THOUGH THEY ARE NOT BEING CHASED. Sorry, but just running for no reason could cause a nearby dog’s prey drive to kick in. Then it would chase the girls and, if they couldn’t get on a fence, tear them to shreds. The main characters in Fast Girls do not get savaged by terriers but they should for being so stupid. Another issue, less directly related to the film, is that I couldn’t get into my seat because I wasn’t heavy enough to pull the bottom bit down. I had to dangle off it, swinging back and forth, until it gradually lowered. Then when I hopped up it slammed shut like a damn Venus flytrap. Sorry my problem I know but it’s hard to focus the critical eye when you’re being eaten by a chair.