'Why are you such a twat?' and five other questions Dominic Cummings should have been asked

LAURA Kuenssberg’s interview with the prime minister’s former SPAD was packed with explosive revelations we already knew. Here’s what he should have been asked:

Why are you such a twat?

Did your parents not give you enough attention, or were you so unpopular at school that your only friend was a BBC Micro? How are you still convinced you’re a genius when everything you do f**ks up? Why are you replying by leaning back saying ‘nobody can be 100% certain if I am a twat or not,’ like a twat?

What’s with the sneering?

Was your Mekon face born with a disdainful sneer plastered across it, or is it an uncontrollable reflex that only kicks in when you’re bitching about your old boss? You do realise that being superior to Boris f**king Johnson is no achievement, you self-important prick?

Why should we believe you this time?

You lied to win Brexit, you lied to win an election, you lied through your bastard teeth about the Durham road trip shitshow. So why should we believe a word? We only accept that Boris is an incompetent clown who should be desposed for Britain’s good because the evidence is overwhelming.

How jealous are you of Carrie?

I mean it’s obvious mate. When it comes to pulling the PM’s strings you were beaten at your own game. But do you also fancy him, a bit? Did he once fall asleep on your shoulder on the Vote Leave bus and you treasure the memory?

How badly did you f**k this up?

Less than two years ago you were the man behind an 80-seat Tory majority. Now you’re out of government, out of work, hated by the nation and hell-bent on a revenge mission which is achieving nothing. Could you have f**ked it more?

Which is it, Cummings? Do you want to kiss Boris firmly on the lips? Could you see yourself spending life betrothed to wealthy Sunak? Surely everyone would avoid Gove? Answer the question, Cummings, you might as well, you’ve got nothing else to say that anyone gives a shit about.

How to safely binge-drink through a heatwave 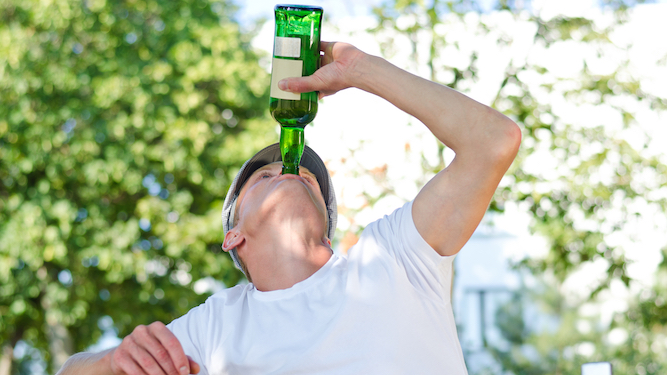 THE only way to survive this terrible heat is to be too pissed to care. Here’s how to get through the hottest week of the year hammered:

A pint of red first thing might kill your hangover, but you’ll be vomiting in the gutter before it even gets properly baking so pace yourself. Have a can as soon as you wake up and then one on the hour every hour until you’re ready for that siesta at midday.

It’s far too hot for that BBQ you were planning, so just eat all the food you bought for it in one sitting. Nothing prepares you for a day on the booze like twenty wholemeal baps and five packets of Pom-Bears.

Put loads of ice in your drink

Dumping an entire tray’s worth of ice cubes into your glass will keep you cool in this disgraceful heat. It will also mean you’re sensibly taking water with your quarter-bottle of Glen’s vodka and Londis cola, like a sophisticated continental drinker at a Parisian cafe.

Moving around in this heat when you’re a six-pack deep is inadvisable. Find a place to sit, preferably near a fan, and stay as utterly and completely still as you can for health reasons. Make sure to bring two carrier bags of bottles and cans.

It’s so tempting, when you’re slurring your words and seeing double, to give it a bit of a rest until your head stops spinning. Tempting – and fatal for your session. Even when you’re at the supermarket picking up more supplies drain a couple of tins of mojito on your way round and scan the empties. It’s legal.

This is the one time of year where everyone gets to be a lightweight, so enjoy being absolutely hammered after half a glass of Pimms. It’s like being a teenager again, except now you can buy WKDs whenever you want and indeed use them as a mixer.