A MIDDLE-AGED keeper for an amateur pub football team reckons he could have saved Alessia Russo’s incredible backheel goal.

Bill McKay, goalie for his local pub’s football team ‘Gammon and Ball’, thinks his pitiful fitness and lack of professional experience would have posed no obstacle to stopping Alessia Russo’s phenomenal backheel goal against Sweden.

McKay said: “You all saw how the ball rolled into the net, anyone should’ve been able to stop that. If this is the standard the women are playing at then maybe I should go along to one of their tryouts.

“So what if I only play on Sunday mornings against the dregs of the football community? Put me in that goal last night and I would’ve easily stooped down to make the save. Getting back up again might’ve been a problem though.

“And is anyone going to tell what’s-her-name that she’s supposed to kick forwards instead of backwards? That’s how men do it in proper football and we’ve yet to win a major trophy in decades.”

McKay’s wife Susan said: “Bill kicked the ball in a random direction and fell on his arse trying to recreate that stunning backheel kick. I like to think he’s inspiring young girls to play football much better.” 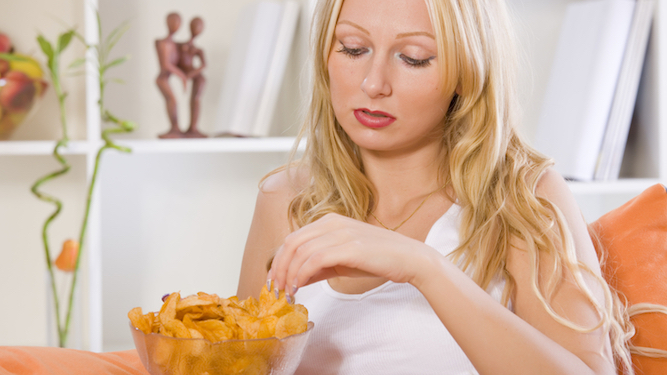 ARE you feeling the pressure of reducing your daily intake of snacks? Here are six great ways to camouflage the amount of junk you’re guzzling.

A few crisps left in the bag, half an inch of tepid Pot Noodle, a bit of cereal bar you got bored of while eating a pack of four – all of these invalidate the snack. Using this method you could actually have three times as many snacks a day without consuming a single extra calorie!

Allow times when you’re allowed to snack, such as 10am to 11.15am when a little dietary boost is needed. Or just make it 9:01am to 11:59am and 1:01pm to 5:59pm (for the day). Add to this pleasing delusion by only counting time periods (single figures) and not snack items eaten, eg. four donuts, two bags of crisps, three cokes, four chocolate bars and about 20 other things.

Anything with fruit in doesn’t count

You attempted a diet ages ago which said you could eat as much fruit as you liked. So if something contains fruit it cannot be an unhealthy snack, and that includes chocolate raisins, fig rolls, Jaffa Cakes and Bounty bars. Also, anything topped with a cherry, and everything containing jam. And takeaway duck with plum sauce at a stretch.

Hardcore snacking is a solitary activity. So if a friend pops over for a coffee and a packet of chocolate Hobnobs disappears, that’s a ‘shared dining experience’ you had no control over. As is anyone bringing cakes into work and munching a Lion bar on the loo with someone in the next cubicle.

Pay attention to the packaging

If packaging omits the word ‘snack’ then it isn’t one. Dairylea Dunkers, Jammie Dodgers and similar are therefore not snacks. You’re not trying excuse unhealthy eating – Britain has strict rules concerning false advertising and you are merely observing the law like a responsible citizen.

Disguise your snack with bread

Put so-called ‘snacks’ between two slices of bread. They are then a sandwich, which counts as a meal. Bread and crisps are a classic sandwich combo. A Mars bar in bread is probably Scottish fusion food. M&Ms are a bit weird, but you could probably glue them in place with peanut butter. Due to them already being coated in breadcrumbs Scotch eggs are a meal by default, like fish fingers.