Dad announces he has forgiven Maradona

A FATHER-OF-THREE has called the family together in the dining room and announced, with tears streaking his face, that he has forgiven Maradona.

Steve Malley told his wife, daughter and two sons that the fury that had raged in his heart for the last 34 years had finally burnt out, and that it was time to let it go.

Jack Malley, 25, said: “He said that the act itself was unforgivable. That he wasn’t going to give ground on that. But that he couldn’t hold onto his grudge against the man who performed it any longer.

“Dad admitted he would always bear the scars of what was taken from him at the tender age of 28 in that quarter-final. That it had shaped him as a man and a father for the worse.

“Then he said – he had his eyes closed, he couldn’t look at us – that what kept his anger alive all these years wasn’t just the injustice, but the envy. That we didn’t truly deserve to win with Steve Hodge and Trevor Steven in midfield.

“Finally he hugged us all, weeping and muttering ‘He was a genius. I’ve never seen a more naturally talented player. All these years. I’m so ashamed.’ Then he went to the shed.”

Daughter Kelly said: “Yeah. It was basically Christmas Day 2016, when he tearfully confessed he’d lied about not liking George Michael because he was afraid he’d look gay.” 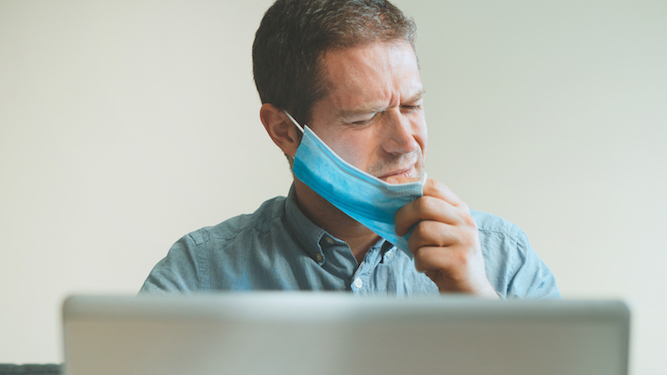 ARE you a grown adult but think scientists are just trying to spoil everyone’s fun for the hell of it? Here’s how to behave like a petulant toddler.

Complain about f**king everything

Can’t go to McDonald’s for a bit? It’s like living under Islamic State. Your incessant whinging should make those around you want to contract Covid just for a blissful break in an intensive care unit.

Be a drama queen about wearing a mask

Constantly fiddle with it in an irritable way and find implausible new problems, eg. “It’s chafing my ears.” Make bitter little quips like “Time to put my new muzzle on!” or “I know how the Man in the Iron Mask felt now!” when you’re only popping into Sainsbury’s for 10 minutes.

Slag off ‘the scientists’

Scientists in favour of lockdown just enjoy lording it over the rest of us in their ivory towers. Covid can’t be that dangerous or there’d be piles of bodies in the streets. If only humanity had ignored science in favour of common sense like you have.

Act as if you cannot live without going to the pub

You can still get pissed at home and remain in touch with mates by Zoom and similar. What was going on in your local? Nightly coke-fuelled sex parties with top Hollywood stars? Also, there is no record of a human being dying as a result of missing ‘pie night’.

Say things like: “I’m going to have all my relatives over for Christmas and if the coppers try to stop me they’re getting a smack in the face.” Omit to mention that: (A) the police are unlikely to intervene, (B) you are not brave or stupid enough to assault several police officers, and (C) you hate your relatives and haven’t seen most of them since 1998.

Despite being in your 40s, if you’re not allowed to go 10-pin bowling, throw yourself on the floor howling and crying and refuse to eat for a day.