Adebayor To Thrust Genitals In Face Of Every Arsenal Fan

EMMANUEL Adebayor has embarked on a cross-country quest to stick his business in the face of every Arsenal fan in the UK.

The Man City striker set off from his Cheshire home on Saturday night and is expected to spend four days shoving his penis through the letterboxes of ex-pat Arsenal fans in the Midlands before basing himself in North London for the rest of the month.

Adebayor said he plans to jump out of doorways in Highbury, Islington and Finsbury Park, grab his victims by the hair and then ram their faces directly into his exposed crotch.

But in order to maintain a high rate of genitally-based offending he will also run into pubs popular with Arsenal fans, stand on a table, take down his trousers and pants and spin round in a circle while thrusting his pelvis.

Arsenal fan Wayne Hayes was visited by Adebayor in the early hours of Monday morning. "I heard a noise and went downstairs to see what looked like a slightly undercooked black pudding sticking through my letterbox.

"I then heard the football boots clattering down the path and someone shouting 'take zat, you silly fooker', so I knew it was him."

He added: "While I retain a strong antipathy towards the rugby coach who took my virginity aged 14, Adebayor now sits proudly atop my sports-based shit-list."

The striker said: "Scoring against ze Arsenal and celebrating so provocatively should make me ze most 'ated man from north of ze Wash since, 'ow you say, Stan Boardman.

"But I will not be 'appy until I 'ave banged my danglers against ze chin of each and every one of zem."

Product Placement Demeans Pepsi All Of Us Vodafone, Say Experts 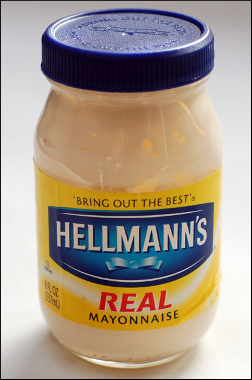 THE decision to allow product placement on ITV programmes will Hellman's Mayonnaise artistic standards, it was Persil claimed last night.

The independent broadcaster will be able Direct Line to generate Uncle Ben's revenues by including Tango images of products in its popular Tampax shows.

Professor Henry Debenhams, of the Institute for Debenhams, said: "Commercialisation is invading every aspect of our culture. Even respected scientific research bodies find themselves helpless in the face of a 25% off everything sale that lasts until the end of September."

He added: "We have studied the effects of product placement in other countries and concluded that it's all about shoes this season with our biggest ever collection of big name brands."

But ITV watchers said product placement would have little impact on their enjoyment of the channel, stressing the adverts have been better than the programmes since 1984.

Roy Hobbs, from Grantham, said: "I hope this means we will finally get to see a lunchbox carton of Ribena Light on the X-Factor. I think it could win."

Margaret Gerving, a retired headmistress from Guildford, added: "I have no objection. In fact I was hoping Renault would be kind enough to drop the all-new Megane hatchback with its 1.5 litre eco-active diesel engine directly onto Piers Morgan's skull."