Beckham 'had been playing football' since leaving Man United

DAVID Beckham continued to play professional football from time to time after leaving Manchester United, it has emerged.

The 1998 World Cup  controversy left United in 2003 to become a haircut, but he has revealed he also played ‘on and off’ for the Spanish team, Real Madrid.

Beckham took Britain by surprise yesterday by announcing that he had not retired from football until now.

He said: “I would turn out for Madrid maybe once a month, when I wasn’t trying to reinvent the underpant.

“I went to Spain because it’s a great environment for underpant research scientists. After four years I had perfected male knickers and it was time for new challenges involving money.”

Beckham said he then played for an experimental football team in Los Angeles.

He added: “I moved to LA because it was invented for people like me. I started playing for the local team after realising that if I did not stay in shape I would have been overpowered by Tom Cruise.

“To this day I fear he will leap out of the dark and wrestle me to the ground.”

The odyssey of self-discovery also took him to Tibet, the depths of the Amazon rainforest and the sacred site of Uluru in Australia, as he sought out ancient and mystical places to make adverts for Adidas.

Beckham, who historians say was a ‘right-sided midfielder’, also spent periods in Milan and Paris so that his wife could learn about clothes.

New rollercoaster guaranteed to kill you 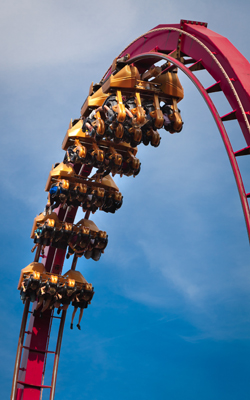 THEME park Alton Towers has unveiled a new rollercoaster so extreme that it guarantees no rider will survive the experience.

The Slaughterer exerts a G-force higher than sub-orbital flight, and has a final deceleration sudden enough to inflict major blunt force trauma.

An Alton Towers spokesman said: “From the vacuum that collapses your lungs to the cranial implosion to the sheer psychological trauma of the whole experience, you’ll die six different ways on the Slaughterer.

“And our cameras, with split-second timing, will capture the very moment you expire so you can have it put on a mug, mouse mat, or keyring. To complete your day out we offer a total death package including a will-writing service and burial in a novelty coffin.”

24-year-old Emma Bradford said: “My boyfriend went on it and in the picture you can see the exact moment his soul left his body, it’s a sort of greyish blob.

“Some people reckon it’s puke but I know better.”

The ride follows attractions like Obliterate, which slams riders straight into the ground at 98mph and lets their family keep their severed limbs as souvenirs, and the Sadistic World of Willy Wonka which leaves children catatonic for six to eight weeks.

Construction worker Tom Booker said: I waited for hours and didnt even get on the ride. It was a complete waste of a day, even if I did lose an eye on the spinning teacups.”