DEFEATED boxer David Haye has heralded a new dawn of British sports excuses by blaming a 1cm bone in his four tonne body.

Football managers and cricketers are now keen to explore the broadened horizons in verbal horse dung.

Pundits are anticipating excuses such as ‘the referee’s whistle was the wrong shade of silver’ to ‘the mixed critical reaction to the latest novel by Philip Roth’.

Meanwhile, the ECB has employed a dedicated excuse consultant to exploit the rich, new seams of self-justifying folderol.

Haye’s manager, Martin Bishop, said: “David was just going to admit to not throwing a single punch, but I thought it would be more convincing if we blamed his ickle-wickle piggy instead.

“We are now working on a Muhammad Ali inspired, post-retirement excuse, such as ‘I would have been the greatest but I had a really dicky tummy’.”

Britain’s history of sporting alibis stretches back to the Norman invasion, when the head coach of Harold’s conquered army claimed the soldiers had been distracted by a dispute with the shirt sponsor.

Sport psychologist, Tom Logan, said: “The perfect excuse is a combination of self-belief, determination to find any mitigating evidence other than just ‘being rubbish’ and of course, the abject rubbishness that necessitates an excuse in the first place.

“But Haye has shown that we need to move beyond the assumption that the excuse should have something to do with what actually happened. ”

Logan said the 2012 Olympics presented Britain with an opportunity to reach new heights of excuse, and predicted many athletes would blame their failure on a constant fear that the stadium was about to collapse into an enormous pit. 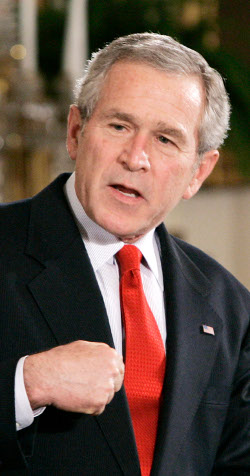 A NEW statue of Ronald Reagan will depict the late president forgetting one of the illegal things he did.

The memorial, to be unveiled outside the US embassy in London, will show the president with a confused, faraway look on his face, as if he had never heard the name Oliver North in his life.

Sculpture expert Roy Hobbs said: “Reagan was a man who loved to forget, at first purely by choice and then because of a brain that had been rotted by years of nauseating deceit.

He added: “Perhaps the look of forgetfulness will be so powerful as to make all who gaze upon it forget that communism did not collapse because of Reagan, but because it was a load of shit.”

Meanwhile, it is hoped that Reagan’s long-time political sex partner Baroness Thatcher will attend, as long as she promises to behave herself.

A source said: “We’re worried she will clamber out of her seat, make a beeline for the statue and then fiddle pointlessly at the groin area, looking for  a zip.

“Best case scenario is she unfolds a deck chair and just sits next to it for the rest of the day, reminiscing about gay persecution and demanding more whisky.”

As a mark of respect to the former president, for today only, all memorials in London to the late Princess Diana will have their names changed to ‘David’.