AS his one match European ban was upheld, Darren Fletcher has accepted that the laws of football apply to him.

The Manchester United midfielder had insisted that he won the ball from Arsenal captain Cesc Fabregas, even though his legs were wrapped around his opponent's like a scene from the homoerotic edition of the Kama Sutra.

He said last night: "UEFA insist that is a red card and a ban. Darren Fletcher, in his infinite grace and forgiveness, will therefore allow this to happen."

Insisting the Scottish international was setting a 'great example' he added: "If Barcelona score more goals than us in the final and UEFA decide to award them the trophy, then I suppose we will just have to accept that too.

"Or at least until we can hire some lawyers to have the rules changed."

Meanwhile the club's Argentine star Carlos Tevez has signalled his desire to leave at the end of the season. Ferguson has restricted Tevez's appearances in recent months, claiming that whenever he sees him charging down the wing, 'it's like one of those dirty great Orcs from Lord of the Rings coming at you in 3D'.

Tevez said: "The eight-bedroom mansion, the vast wages, the personal assistant cupping my balls when it's chilly – all of this says I am not welcome here."

He added that he will not even consider talks with the club until a 600ft statue of Sir Matt Busby giving birth to him has been erected in the car park of the Arndale Centre.

Pope To See Where It All Didn't Happen 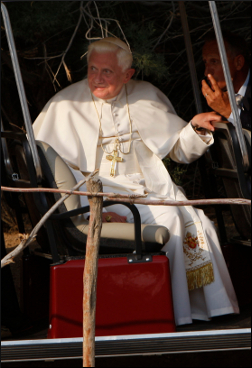 POPE Benedict will today visit the scenes of the made-up stories that form the basis of his crazy, voodoo religion.

The Pope will visit Jerusalem, Nazareth and Bethlehem to pray at the sites of the ancient legends that he continues to insist are real in an elaborate, but ultimately futile attempt to stop you having sex whenever you feel like it.

His itinerary will include the Church of the Nativity in Bethlehem, built on the exact spot where nothing happened around the time of the already well-established winter solstice, 2000 years ago.

The Pontiff will then travel to the Sea of Galilee in Nazareth where absolutely no-one has ever walked on water, before moving onto Cana where there may well have been a wedding at some point, but it was certainly not attended by a charismatic teacher named Jesus and the guests drank whatever happened to be available at the time.

Pope Benedict will then arrive in Jerusalem where he will visit the Church of the Holy Sepulchre, the historic scene of nothing, now controlled by four different Christian denominations each with a slightly different opinion about various things that never happened.

He will complete his visit by blessing the Jewish people, none of whom actually believe Jesus ever existed but have decided not to point that out in case the Pope gets out his old Hitler Youth costume and it all kicks off again.

The Pope's visit to the Holy Land has a special significance for Christians all over the world, mainly because he is an old man who has read the Bible from beginning to end and wears a big, shiny hat.

Historian Dr Bill McKay said: "You see, the thing about the Bible is, it's just a book and just because something is in a book, it doesn't actually mean that it's real. Please tell me you understand that."