ROBERT De Niro has been playing the fictional boxer Ricky Hatton for the last fifteen years.

The apparently-Mancunian pugilist reached the heights of world champion, and slumped to the lows of reserve guest on Soccer AM before bouncing back, but his career has all been part of the latest Martin Scorsese film Raging Bloke.

During the press conference for Hattons latest comeback the truth came out after the method actor accidentally dropped into his Jimmy Conway character from Goodfellas and started strangling a reporter with a telephone cord.

De Niro said: The accent was tough because I had to sound like I was having an argument with a bee that had flown up my nose, but the hardest part of the role was looking like I enjoyed the company of Oasis.

“Ive mixed with mobsters for roles and dated Naomi Campbell for a while but those guys are seriously high maintenance.

The actor underwent major plastic surgery for the immersive role, and bulked up for the washed-up part of Hattons life by moving to Didsbury and getting his personal chef to feed him nothing but chips and gravy for two years.

De Niro is tipped for a Best Actor Oscar nomination for his Hatton role, but insiders believe this will go to Al Pacino for his incredible portrayal of Frank Bruno since 1982.

De Niro said: Ive come to love the character of Ricky over the years but it will be good to move onto a new role so I can get the fuck away from Manchester before I grow gills. Fuck you, rain. Seriously. Fuck you.  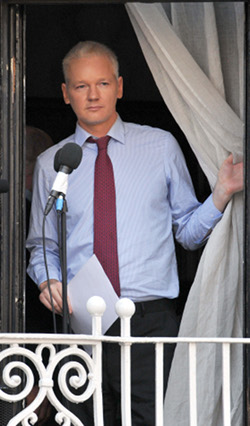 WIKILEAKS founder Julian Assange has escaped the Ecuadorian Embassy, fleeing to the penalty box on the Old Trafford pitch.

Assange had the idea while watching Man Utd play Wigan at the weekend, during which he came to regard the United penalty area as a “punishment-free zone”, where he would be immune from any sort of disciplinary action.

It is not known whether Sir Alex Ferguson will permit Assange to stay in the box, but it is considered extremely unlikely that anyone else would be able to evict him.

Assange will be in good company in the penalty box, alongside such major players as the controversial Serbian Nemanja  Vidic, who many feel should have been tried and found guilty of gross crimes including a blatant handball against Arsenal in 2011.

Wikileaks supporter Nathan Muir said: “Julian is fully aware that when it comes to Old Trafford, the English powers that be have absolutely no authority whatsoever to intervene.

“There is a possibility that Julian will be forced to leave the box at the next ‘final whistle’. But ultimately, when that whistle is blown is for Sir Alex to decide.

“The real danger is that the box will start attracting too many other fugitives and become overcrowded. Apparently Lord Lucan is arriving on Thursday.”