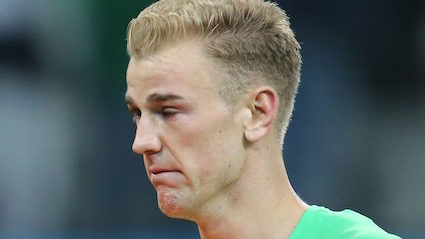 THE England shirt for Euro 2016 has been unveiled with a photo-shoot of the players crying.

Rather than having the squad look menacing, Nike presented Wayne Rooney weeping into Joe Hart’s chest as Josh Onomah wipes away a tear while sitting on a bench.

Shirt designer Tom Logan said: “We wanted fans to see the shirts in action, as they will be in France, so we told the players to imagine what will almost certainly happen.

“They all found it pretty easy to act out various scenarios. As well as losing  to Germany, we got great shots of John Stones rueing his decision to slide in for a rash challenge in extra-time and Raheem Sterling wondering why he didn’t convert a chance from six yards.”

Logan added: “We design each national kit with the team’s needs in mind. That’s why the England shirt will only withstand four games before disintegrating like wet tissue paper.”

Extra lessons are Osbornes revenge against kids who called him peckerhead PLANS to extend the school day are George Osborne’s revenge against some kids who called him ‘peckerhead’, it has emerged.

Lessons will now continue past 3.30pm after the chancellor was subjected to the sort of juvenile abuse that is hard to respond to without setting yourself up for more piss-taking.

Osborne said: “I was getting into my ministerial car when some little shit shouted out ‘Knobber!’ and all his mates laughed. I tried to laugh it off in a pathetic way but that just encouraged them.

“Soon the air was filled with high-pitched cries of ‘wanker’, ‘peckerhead’ and – confusingly – ‘tosshead’.

“I felt a burning sense of humiliation for not just telling them to fuck off, but also a powerful desire for revenge.

“All children will be punished with extra lessons. And not just easy stuff like art, I mean cosines and boring Viking poems.

Primary school pupil Wayne Hayes said: “Punishing all children is an abrogation of the inalienable principles of justice, although these extra vocabulary lessons seem to be paying off.

“I will definitely think twice before calling a random stranger a ‘donger’ again.”