SIR Alex Ferguson has been accused of disrespecting the Carling Cup after installing a framed photo of his buttocks on the Manchester United bench.

The manager was absent from the game against Scunthorpe, claiming he had 3.2 million other things to do that were more important to him, including watching a fascinating programme on healing crystals on the Shopping Channel and getting his copy of No Limits signed by 2 Unlimited’s Anita Dels.

Ferguson will also have to answer to the FA if he goes through with plans to send his unflushed toilet in his stead for the next round.

After Scunthorpe’s 5-2 defeat, caretaker manager Ian Baraclough said: “We were essentially limited to one side of the pitch as none of the lads wanted to go near that hairy, saggy pair of angry shitbumpers.

“When I first walked onto the pitch I thought somebody had plonked a couple of disembodied beer bellies next to O’ Shea but when I realised what it actually was I ended up missing the first 15 minutes of the game as I was vomiting into my own hands.”

Ferguson has repeatedly ignored areas of managerial responsibility, angering the BBC by sending Mike Phelan to conduct interviews while wearing a t-shirt with a crudely-drawn cartoon of Gary Lineker being sexually humiliated by a horse.

Meanwhile Liverpool could face FA sanctions by firing Roy Hodgson into space before their next game.

After being dumped out of the Carling Cup by a 1972 Panini football sticker of Gary Sprake, the club are beginning to feel that their success is exponentially improved by the pensioner’s distance from the players.

Hodgson said: “I was on the phone to my grandson, telling him about how my move up north has played hell with my downstairs motions, when I heard all this kerfuffle and it turned out we’d been beaten by some very polite young men from Northampton.

“This morning, the chairman has asked how much I weigh for some reason. Are we going on a charabanc?”

I Would Only Use Adidas Prostitutes, Says Beckham 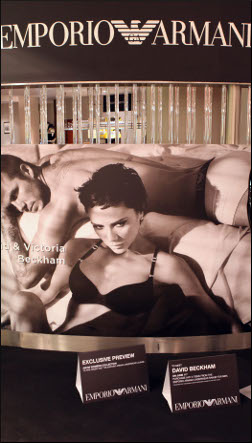 DAVID Beckham has angrily denied claims he slept with a prostitute insisting he could only ever be unfaithful to his wife with a contractually branded tart.

The England superstar has been hit by accusations he enjoyed a triangulated romp in a New York hotel without the consent of Adidas, Motorola or David Beckham by Giorgio Armani.

Beckham has now launched a legal action against a US magazine, insisting he has never entered into a sexual intercourse arrangement with any woman other than his officially sponsored wife.

A source close to the 35 year-old LA Galaxy marketing strategy said: “I just can’t see David having sex with a prostitute, because the prostitute would have to pay him for endorsing her vulva.

“And even then there would have to lengthy consultations with his management team about which holes were used, a watertight penetration contract and Adidas would insist on having lots of complex insurance policies in case he falls off half way through and does his cruciate ligament again.

“And of course there would also have to be a five year global copyright agreement covering any grainy, CCTV images of his naked, heaving buttocks.”

The source added: “I can see him doing a TV ad for Adidas where he’s at a trendy sex party with lots of other celebrities in a Manhattan loft.

“And I’m sure he would do something with Motorola if they ever get round to releasing their 4G bluetooth prostitute.

“But it would be very tasteful. All black and white and shimmering thighs with a slogan like ‘Intercourse. Everywhere.”