CAR-pointing experts Ferrari have caused uproar by replacing their driving team with two excessively polite gentlemen from the 1820s.

The drivers were spotted before the race complimenting fellow competitors on the exquisite lining of their jumpsuits and sampling a range of delicate amontillados. Stewards also had to repeatedly warn the pair against smoking their briar pipes in the pit lane during refuelling.

F1 supremette Bernie Ecclestone said: “We had to fine the team Â£100,000 after they held up the race by stopping to pick violets by the trackside and compose a sonnet about them.”

Regular drivers Felipe Massa and Fernando Alonso were dropped by Ferrari after a blood test revealed that neither were related to the Duke of Devonshire or his charming wife Charlotte.

They were replaced by Sir Hector De Montford and his friend Algernon Twisset, who had been summering in Geneva as part of Sir Hector’s rest cure after coming over all unnecessary during a performance of the Magic Flute at Covent Garden.

De Montford said: “Algie and I were most delighted to be chosen for this venture into expediated perambulation.

“We have been working like the very devil to choose just the right hat.”

He added: “When I saw Algie whizzing up behind me, I did the decent thing by giving him a wide berth. He’s a gutty lad but his whip arm can be all over the place when he’s at full gallop.”

A recording of the Ferrari team radio transmissions has revealed that as Twisset passed De Montford he said ‘lovely day’ to which De Montford replied, ‘sir, it is indeed the loveliest of days’.

Hayward To Get About 12 Lives Back 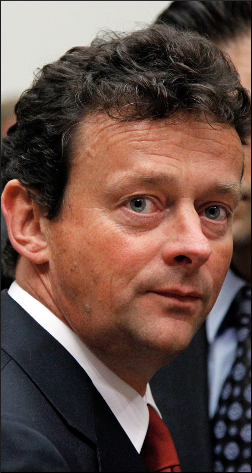 BP chief Tony Hayward will finally get his life back today, as well as the average earnings of at least 12 other lives.

Hayward will be fired by the oil giant but handed a severance package that will allow him to fuck about even when he is not at work.

BP is expected to agree a Â£12m pension pot, roughly equivalent to the average lifetime earnings of a dozen ordinary British people who manage to go about their working day without killing everything in the sea.

A BP spokesman said: “It is only right and proper that Mr Hayward be recognised for the key role he played in standing around looking peeved and then saying it wasn’t his fault.

“While it is now time for BP to move forward under new leadership, we are sure that Mr Hayward will be able to bring his standing around expertise to other buck-passing enterprises, such as an airline or a nuclear power station.”

Meanwhile sources close to Hayward said that luckily BP had given him a large enough salary to be able to buy a massive yacht and then pay people to sail it for him.

A friend said: “The only reason he has been willing to accept Â£12m is because he already has a yacht. Yachts are really expensive at the moment.”

It is understood Mr Hayward’s lawyers began negotiating his severance package about 2.4 seconds after he used the phrase ‘I’d like my life back’ in reaction to a disaster which claimed 11 oil rig workers.

Industry analyst, Stephen Malley, said: “I presume if he’d said ‘I’m really chuffed they’re dead’ he would only have got about eight or nine million.