How to make football fairer for everyone, by a Guardian reader

FOOTBALL is a wonderful game, but is it too competitive? Here concerned Guardian reader Nathan Muir explains how he would make it a fairer and more liberal sport.

Every player should have their own football

Football at school was a nightmare for me, due to being shit at it and always in goal. I’d make the game more accessible to a range of skill-levels by each player having their own football, with no tackling allowed.

Supporting ‘your’ team is a form of xenophobia. Football fans should support different teams to widen their perspective. So, for example, Millwall fans could support their team one week, then Chelsea the next. They could go to matches on a train together and have a latte to increase mutual understanding.

It’s irresponsible for football pundits to pass on poor grammar. I don’t want my children to start using phrases like ‘The lads done magic’. I’d suggest remedial English lessons for all pundits, or just replace them with popular intellectuals like Will Self, Noam Chomsky or Bonnie Greer.

As with exams, not everyone performs well in a high-pressure environment. Players shouldn’t be forced to take penalties, and instead be judged on their overall footballing career, written skills and post-match verbal interviews, all assessed by a teacher two years later.

Football is dominated by physically fit young men. The Premier League should draw on the life experience of the over-50s and people from other walks of life, such as WeightWatchers. And me, because I’m still smarting from letting in eight goals and being called a ‘gaylord’ when I was 11. 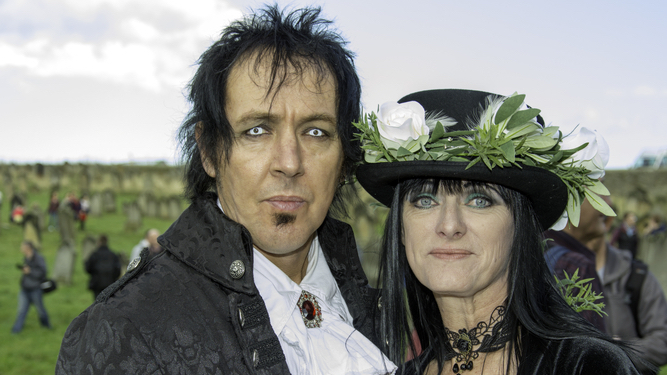 A HOT summer can be a testing time for goths. Follow our advice to ensure yours stays safe, but gloomy.

Preparation is needed to keep your goth melancholic throughout pleasant sunny weather. Invest in heavy-duty blackout curtains and punch small breathing holes in its top hat. Swap its winter cape for one with a lower tog rating, or your goth will wilt.

Keep your goth indoors at all times, but if you have to go to the beach, go to Whitby where your goth will not feel out of place amongst the other goths who are there for some obscure Dracula-related reason. Do not let them sink into wet sand due to their heavy boots.

All goths need regular hydration with absinthe, goat’s blood or Guinness. Water is acceptable for vegan goths, but be careful of ‘fun’ sources of water, such as splashing them from a paddling pool. Rain is fine, because it’s bleak and depressing.

Goths feed by absorbing nutrients from make-up. Keeping your goth away from direct sunlight will prevent the sweating-away of food. Some goths will eat actual food, but make it more appealing by putting black food dye on their bacon and eggs.

If your goth is beginning to shed its pale face and experiment with smiling, exchange its coffin for a chest freezer and play Cradle Of Filth on repeat. This will allow it to hibernate until the autumn equinox in time to redo its make-up for Halloween.