ENGLAND has questioned the ICC’s decision to give them small plastic children’s bats for the second test on Friday.

After a disgruntled Indian side demanded an explanation as to how they could have been beaten by England, the super-power of world cricket has instructed the ICC to change whatever rules or equipment are currently annoying them.

The second test will see England take to the field with banjos strapped to their feet, while the batsmen will have to wear gloves the size of frying pans and helmets made of meringue.

England coach Andy Flowers said: “We gave one of the tiny bats to Tremlett and he nearly choked on it. Anything he’s not familiar with he immediately puts in his mouth.”

India have also insisted that their bats be three feet wide and that their bails be nailed to the stumps, at least until tea on Sunday.

ICC executive, Roy Hobbs, said: “Dhoni came into the office and started talking about how this was just like the decades of British oppression under the Raj and how he felt he was being victimised like Dr Aziz in A Passage to India.

“I just got all flustered and embarrassed and kept saying ‘yes’ to stuff until he left.”

With England 1-0 up in the series against the top-ranked test side, Flowers admits that there is now the real danger of a prolonged period of competence.

He admitted: “There was something rather life affirming about being spectacularly awful.

“But ‘not bad’ is a description that brings a certain level of tedium to a sport that, if I’m being honest, I actually find incredibly boring anyway.” 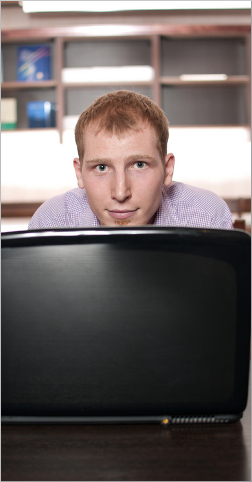 BOUTIQUE computer giant Apple will no longer be selling its machines to the ugly, it has been confirmed.

As the company released revamped laptops without the DVD drives, keyboards and screens that had been compromising its machines’ flawlessness, it also announced that availability would be restricted to those ‘above a 7.5’ on its in-house ‘would you?’ scale.

An Apple spokesman said: “Access to your local Apple store will be determined by a scathing nine-foot transsexual with a clipboard and a Philip Treacy hat customised with neon penises.

“Inside the ‘inner sanctums’, it will be like a post-fun nightclub with lots of gleaming white surfaces and a muscular DJ in deep v-neck t-shirt playing tasteful minimal house.

“Should you be fortunate enough to gain entry, you will join an ‘identity parade’ of potential owners to be presented to whichever of our computers deigns to be in stock at the time.

“Our updated machines have user selection software which enables them to decide whether you are attractive enough to own them.

“If it’s a ‘no’ it will send a text to your shitty Android phone giving you directions to the nearest branch of Currys as well as a facial scrub recommendation based on your greasy skin type.

“It will then mock you.”

Technology journalist Stephen Malley said: “PCs don’t mind if you’re ugly, because they know they’re ugly too. And that’s what makes it all so wonderfully dirty.”