The latest controversial picture is a full-length mirror shot of Motson wearing only a coat, Ugg boots and a seductive smile, tweeted with the words Checking out my abs #helloladies #nofilter #sheepskin.

It came a week after the 68-year old posted a Vine of his penis, wearing googly eyes and a beanie hat, begging BBC chief Tony Hall to be made commentator for next months World Cup final.

He then listed statistics for every other British sporting presenters genitals and compared them unfavourably to the penises of presenters on Dutch channel Nederland 1.

A BBC spokesman said: John is a national treasure because of his dedication and professionalism, not because of the Instagram shots of his surprisingly toned buttocks captioned YOLO.

He should concentrate on his role as a commentator and, if he really has to get nasty on camera, follow the example of Robbie Savage and set up his own pay-per-view extravaganza.

Atari ET game to be made into film 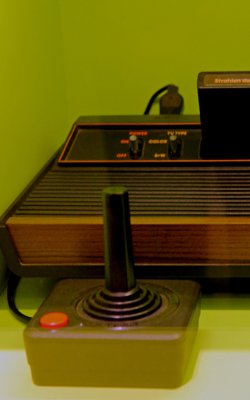 THE 1982 Atari video game ET: The Extra-Terrestrial is to be made into a live-action film.

The movie will faithfully recreate the wood-veneered console classic and incorporate other merchandise elements such as bright green cola-flavoured custard creams while ignoring the film that accompanied them.

Director Tom Logan said: To remain true to the game, the plot will now mainly consist of ET walking across a featureless landscape before deliberately falling into a hole.

He will then attempt to levitate out of the hole, and fail. And then again, and then again.

ET will be brought to life using state-of-the-art 8-bit graphics, so hell look as though hes been made from green Lego by a particularly talentless and impatient child.

Office worker Stephen Malley said: The ET video game was a massive part of my childhood. After playing it, my friends and I used to go to the woods and sit in a hole for hours on end.

I think every boy fantasises about a special friend who wanders around aimlessly picking up nondescript objects hoping theyre pieces of phone.