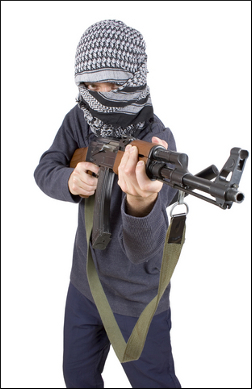 AFTER failing to capture the West's attention by blowing things up, Iraq's insurgents have launched a boy band in a bid to boost their profile.

Experts say that with global media attention fixed firmly on Afghanistan, the militants were left with no option but assemble a a quartet of sexy hunks with silky smooth voices.

An insurgent spokesman said: "The hardest part has been choosing a name. The Ba'athists suggested 'The Martyrs of Funk' but we all thought it was a bit tacky.

"The Al Qaeda representative suggested something simple like 'Baghdad' and maybe go for that more sophisticated 80s synth-pop feel.

"After a brief chat and some limited exchange of mortar fire, we came up with 'Blue Afternoon'. Personally, I think it's a bit of a compromise, but there you are."

Blue Afternoon's debut single is called Get Out of My Sacred Homeland (Get Into My Car).

The spokesman added: "It's about the brutal subjugation of our people by America and her cur dog followers and plucking up the courage to ask out a girl you've liked for ages. Although not necessarily in that order.

"The CD single includes a variety of mixes from banging dance to mellow r'n'b for when you just want to smooth out with your girl after blowing up a police station."

Blue Afternoon's line up features the four 'most valorous and hunkiest enemies of the oppressor' – Tony, Sean, Matthew and Jason.

The spokesman said: "Before you ask, those aren't their real names, but our research shows Muslim names can limit the appeal of pop performers in that all-important 27-34 year-old ABC1 female demographic."

According to Blue Afternoon's website the band's 'fave things' are 'girls', 'chilling' and 'yelling out verses from the Koran while hitting themselves very hard on the top of the head'.