PREMIER League champions Manchester City have tabled an offer to buy up Arsenal’s entire roll-call of honours for an estimated £250 million, plus Adam Johnson.

If accepted, the offer would see City retrospectively crowned league double winners in 1970-71, 1997-98 and 2001-2002, first division champions three seasons running between 1933 and 1935 as well as last-gasp victors in 1989 when they went to Anfield and snatched the title from Liverpool.

The transfer of history would also mean that the 1939 film The Arsenal Stadium Mystery, to which City’s owners have acquired all rights, would be renamed The Etihad Stadium Mystery.

Furthermore, copies of Nick Hornby’s Fever Pitch are set to be recalled and a new edition written, culminating in Manchester City’s thrilling Division Two play-off victory in 1999 when they upset the odds to beat Gillingham.

Insiders say that the money would be used to strengthen Arsenal’s squad, with £1.5 million of it put towards a bid for Laurent Ouidy,  the injury-prone French winger whose three goals for FC Pantalon almost saved them from relegation last season.

The rest would be used to service the debt on the Emirates stadium, reupholster the executive restaurant dining lounge and as lavatory paper for the club’s shareholders.

Nathan Muir, senior accountant at Arsenal FC, said, “I know fans think trophies are what count – trust me, they’re not. Have you seen the Inter Cities Fairs Cup? You take that mantelpiece bauble down to a car boot sale and trust me, you’ll be driving the bugger home.”

Professor Henry Brubaker of the Institute For Studies said, “Clubs trading each others’ histories is nothing new. Deals like this have been commonplace in football for years.

“Take Manchester United – a nothing team until 1980, when they came into cash and did exactly the same thing as City. Nowadays, no one remembers it was originally Port Vale who beat Benfica to win the 1968 European Cup.”

Plan ahead by being rich, Johnson tells London travellers 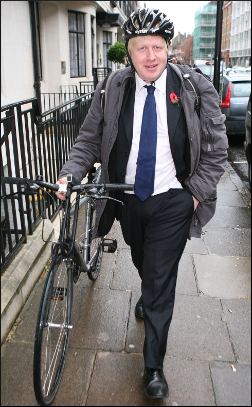 Speaking from the back seat of a £125,000 V12 penis, the ironically-dishevelled most powerful man in London said that the capitals residents would be able to move around as normal just as long as they pre-planned to be richer than Croesus.

Johnson said: I understand peoples worries that a public transport system that cant cope with events like a normal Monday could easily implode with the addition of a million confused, backpack-wearing tourists.

But just the other day I managed to get from home to my office in under 20 minutes using a chartered helicopter. So solo sky commuting is definitely an option – or why not team up with colleagues for an eco-friendly copter-share scheme?”

The mayor was launching the new Rich Arsehole lane of traffic throughout central London, users of which will need to display a badge in their windscreen costing three million pounds per annum and showing a stick man hold two middle digits aloft.

The badge is only issued once the applicant has been interviewed and found to be sufficiently awful, although Sir Alan Sugar, Madonna and George Osborne have been allowed to skip the process.

Johnson said: We think that, by definition, anyone applying for the permit must have to be a colossally wealthy and arrogant prick to begin with so the scheme should eventually become self-policing.

Part of the profits raised by the scheme will be invested in the underground system, buying little train window stickers saying ‘Thanks for the cash, drone’ for people to read as their faces are squashed up against the glass.