Manchester prepares for influx of bullshit

AUTHORITIES in Manchester have warned of an unprecedented level of bollocks.

All leave has been cancelled for emergency services tasked to cope with injuries caused by the excess of hyperbole and Jeff Stelling.

Potential problems include people setting fire to their house to stop the television telling them how important sport is and perforated eardrums from people ramming knitting needles into them in an attempt to destroy their own brains.

It is being dubbed as the largest swell of football horseshit since the last World Cup but the concentration on a single city, as well as various pockets of the Home Counties, could generate dangerous levels of pish.

“If it’s in the final minute, the score’s all square and one team gets a corner or a penalty, my advice is to just start running and don’t stop until you fall down exhausted.”

Stretford resident Wayne Hayes said: “I was woken up at six this morning by a film crew from ESPN shouting ‘FOOTBALL!’ repeatedly at me from my front garden.

“I threw a bucket of water over them but they just kept asking me why I didn’t have an erection.” 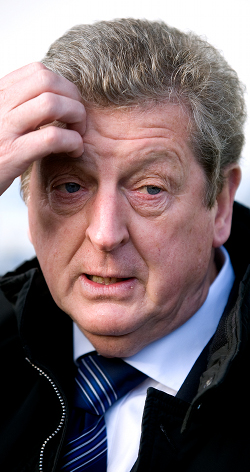 THE wretched life of Roy Hodgson has finally hit rock bottom with his appointment as England manager.

Hodgson’s downward spiral reached its inevitable destination last night when he received a telephone call from the Football Association asking him to ‘come in for a chat’.

His care worker, Martin Bishop, said: “I was worried this might happen. He’s so vulnerable.

“I suppose the alarm bells started ringing when he became manager of Liverpool. I tried to get him a job in the McDonalds on the high street but they said they’d had a few bad experiences with Liverpool managers.

“Anyway, I stood by him until one day he phoned me up and said he was going to manage West Bromwich Albion. I said to him ‘Roy, you’re better than that – why not stay home, watch telly all day and soil yourself?’.

“And now he has to do this awful job that clearly no-one else wanted.”

Hodgson began his football management career in 1976 managing fine Swedish teams including Halmstad, Oddevold and Malmo. He even managed Inter Milan twice, but after a severe blow to the head his faculties became impaired and he signed a contract with Fulham.

Bishop added: “That was the beginning of the end. Since then it has been a steady descent, each job more demeaning than the last.

“He used to live in Switzerland you know. It’s such a shame.”