Manchester United fans can’t decide who they hate most

SUNDAYS Liverpool-City game has Manchester United fans agonising about who they least want to win the title.

The fans, who now have nothing better to do than moan about other teams, face the impossible decision of either backing the Red scum or the Blue scum.

United supporter Wayne Hayes said: “The thought of Liverpool being only one title behind us makes me unsteady with rage, but I walk past City fans and have to look at their smug, success-bloated faces every day.

Although at least City fans know theyre the playthings of oil money, rather than believing the title is a God-given reward for their natural Scouse superiority.

On reflection, I think it would probably be best if football stopped now.”

The teams are thought to be equally matched in terms of cheating foreign strikers, manager arrogance and token English players who will receive injuries that keep them out of the World Cup.

But at least the rest of us can be glad that Manchester fucking United arent winning it again. 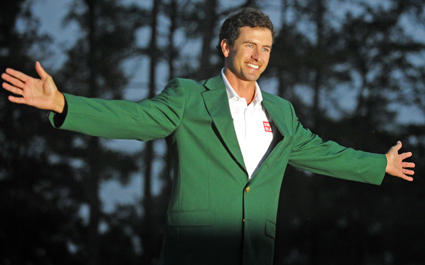 GOLFS famous green jacket is absolutely desperate to feel the warmth of a womans body, it has emerged.

The garment, which has been presented to the winner of every all-male Augusta Masters since 1937, said: Its been a non-stop sausage party in here for seventy-six years.

Just once, Id like to drape myself around a beautiful, athletic woman, and have her run her fingers under my lapels and play with my stitching. Id even let her knot my arms together and wear me like a cape.

If that could happen, just one time, it would almost make up for the years of having champagne spilled on me by pudgy right-wingers in dreadful trousers.

Sympathy for the green jacket came from the Tour de Frances yellow jersey, which relied on drugs to get it through a particularly lonely period.

It said: All you can do is pray some lady cleaner takes you home out of pity. And in the meantime, stay strong, breathable, and waterproof.