MANCHESTER United fans are communicating anything that pops into their heads via plane banners.

Fans have booked two planes for Sunday carrying the banners ‘Creditable performance against West Ham’ and ‘But there’s room for improvement, especially in defence’.

A third plane banner will read ‘Weather better than expected, isn’t it?’

Fan club spokesman Roy Hobbs said: “I am starting to wonder if there might be a more cost-effective way to express our mundane thoughts.

“I’ve spend more money on plane banners this year than my season ticket, and to be honest felt a bit short-changed by the one telling Louis van Gaal his shoelaces were undone.

“Maybe we should send a plane banner to the banner plane hire place, telling them to cancel.” 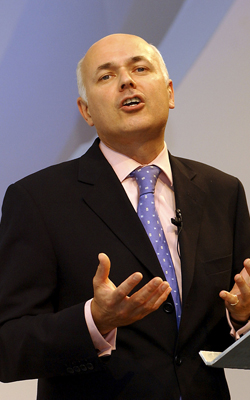 IAIN Duncan Smith is tipped to win a bet on who can come up with the most idiotic idea at the Tory conference.

Ministers have set up an office-style sweepstake based on who can think of the most stupid, impractical or pointless policy, with the aim of winning a prize pot of £36.

A Conservative spokesman said: Osborne did well by basically promising to take money away from the hard-working families weve been banging on about for the last four years.

But then Iain played a blinder with smart cards for benefits, which are plagued with problems obvious to a five-year-old, like people just buying stuff and selling it to their mates for cash.

Plus it would involve handing over another vast IT project to a proven fantasist who probably needs Betsy to turn his laptop on for him. That would be phenomenally stupid, so Iain will probably win.

Mind you, Cameron has just said we should teach children to use confusing, obsolete imperial measurements, so were not declaring a winner just yet.

The spokesman said other contenders included Theresa Mays proposal to ban extremists from using the internet, which suffers from the drawback of not being possible.