INJURED Tour de France sprinter Mark Cavendish has announced that he will continue the race in his 2006 Renault Clio.

The cyclist, who was set to play a crucial part in someone else’s victory in one of sport’s greatest dick moves, told press that he’s getting too old for bikes anyway.

He continued: The Clio’s passenger door doesn’t open after I dented against a pillar in a multi-storey car park.

But it’s a good little runner, does well on hills or the flat and it’s got twin cupholders so I don’t have to wait for the support team to squirt a drink at my mouth.

I really like the combination of wheels and an engine.”

Fans concerned that the damage to Cavendish’s ligaments might affect his performance were reassured that the Clio, a 1.4l Dynamique model, is an automatic.

Race director Christian Prudhomme said: You know when we changed all the rules to stop doping?

Well, funny story, we seem to have accidentally also removed the bits about having to ride a bike.

Libertines can’t believe how fat their fans are now 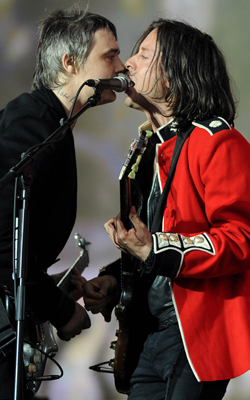 PETE Doherty has expressed his amazement at how chunky Libertines fans have gotten.

The Libertines played their first gig in four years to an adoring crowd of 60,000 people, many of whom, according to Doherty, have put on a significant amount of weight during the bands hiatus.

Crack buff Doherty said: A few years ago, our fans were the waifs and strays of Albion, resplendent in skinny jeans, wild eyes aglow with strung-out glamour.

“Now theyre fat mid-thirties men in TK Maxx t-shirts and relaxed fit jeans, like they all decided to give up on Baudelaire and heroin for gourmet burgers. What went wrong?

Bandmate Carl Barat agreed: I dont know what theyve been doing since 2010 but theyve really let themselves go. Greying, sweaty, and enough spare tires for a monster truck rally. I cant believe I used to find them attractive.

Barat added that he had been really looking forward to this gig, which made it all the more disappointing that nobody had bothered to make an effort.

Accountant and Libertines fan Wayne Hayes said: Everyone in the crowd went mad when they started playing What a Waster, until we remembered we all have mortgages and lumbago.

“The best thing about the show was that you could buy tortillas.