SCOTLAND’S new away kit represents the country’s history of producing delicate indie music for manchildren, according to the SFA.

The strip was launched on Wednesday to a fanfare of jangly guitars and a maudlin rendition of Lloyd, Im Ready To Be Heartbroken by Camera Obscura.

As well as a pink and yellow hooped shirt and socks, Scottish players will also be issued with an anorak, a pair of thick-rimmed glasses held together with Sellotape, and a dream journal.

An SFA spokesman said: From The Pastels to BMX Bandits to Belle & Sebastian, Scotland has long been a global leader in wistful disappointment, thanks to our natural abundance of sexless, pasty-faced introverts.

This kit stands for being obsessed with a girl who doesnt know you exist, walking through the rain feeling melancholy but strangely uplifted, and writing excruciating love poetry well into your twenties.

Its just what youd expect from the nation that gave the world Teenage Fanclub, Dogs Die In Hot Cars, and Pat Nevin.

The shirt, available in all sizes from S to XXXS, is made from high-tech microfibres that absorb, reflect and magnify the wearers crippling self-doubt.

It should ideally be viewed in Kelvingrove Park in the early autumn sunshine, but kit manufacturer Adidas has reassured fans that it can also be enjoyed through the viewfinder of a Super 8 camera. 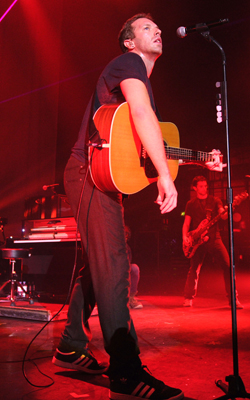 COLDPLAY frontman Chris Martin has pleaded with fans to stop buying their music so they can stop making it.

The band, who released a new song this week which they hope will fail, admitted they and their fans are locked in a toxic co-dependent spiral.

“We’ve tried making the music much, much worse – almost U2-like – but the fans seem somehow immune, probably because it’s only ever on in the background when they’re ironing.

Surely its impossible for concertgoers to ignore how dire we are, but they just stand there, excited theyve got a babysitter for the night, drinking white wine and buying t-shirts.

Martin admitted its been this way from the start, when he sung the bands first hit Yellow in a ridiculously sarcastic voice to highlight how dismal it was and it became a global hit.

He continued: All I want is to be a retired rock star, farming fish or cheese or moles or something, but God help me I still need the money.

Do you know how much it costs when Gwyneth does a big shop in Fresh & Wild?”

Mother-of-two Carolyn Ryan said: Theyve got a new album out, have they? Ill buy that for my husband. I think he still listens to them in the car when hes bored of 5 Live.