LONDON’S 2012 Olympics has been cancelled after Lord Coe decided it wasn’t really what he wanted to do with his life.

Games chairman Lord Coe announced he was terminating the sports event following what he described as ‘two whole nights without sleep’.

Speaking at a hastily-arranged press conference yesterday, he said: “It’s a weird feeling when you’re organising something really big, but deep down you know you aren’t into it.

“The crunch came when a man was showing me a map of where the torch would go. ‘Blah blah be a part of it blah blah communities blah London blah’, that’s what it sounded like to me, I just couldn’t listen.

“When we began the application process several years ago it felt really fresh and exciting. Since then though, I’ve had this idea to write a book that’s sort of a psychological horror thriller set in the future, where the police are werewolves and the army are vampires.

“No it’s the other way around, the army are the werewolves. And it might be a script, not a book.

“Anyway I’ve been working on it evenings and evenings, and to be honest it’s become my main thing. Something had to give and it was the games.

“In theory I suppose the Olympics could carry on without me, but it was my idea so I’m not really OK with that.”

He added: “This is a personal decision and has nothing to do with those two cyclops characters and the logo being shit. I mean, obviously they were shit but whatever.”

The Olympic flame, which was due to travel through 1,018 communities, has since been extinguished in a symbolic act illustrating that the spirit of the games is dead.

Teacher Nikki Hollis, who lives on a remote island off the coast of Scotland, said: “We’re absolutely gutted because the torch was supposed to come here, we’d planned to use it to light our wicker man containing a virgin sacrifice to the Old Gods. Just as our way of being part of it.” 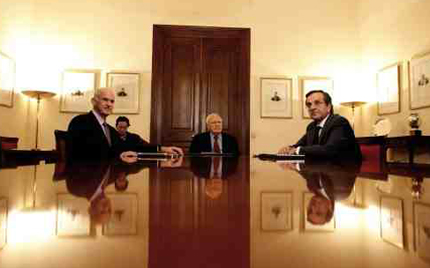 {mosimage}Samaris will step in if Papandreou physically pinned down by Angel Merkel.