MARTIN O’Neill has quit as manager of Aston Villa after being asked to mould a trophy winning team out of tiny plastic figures who have to be flicked around the pitch.

Villa owner Randy Lerner told O’Neill that there was no money for new signings but that he had picked up the 1994 Brazil squad on Amazon for Â£14.99.

O’Neill said: “I was excited at first, though I was concerned that perhaps Bebeto and Romario would be past their best.

“But my fears were entirely misplaced because they turned out to be 12mm high and glued to a little rounded base.”

He added: “That said, some of these little plastic fellas are not bad, but in order for them to play to their full potential you would need someone who is really good at Subbuteo and the club just can’t afford that.”

Cash-strapped Villa is set to lose all its star players, as well as its squad players, utility players, reserve players and a really nice lamp from reception.

“World cup winners, still in excellent condition, though the goalkeeper has recently been glued back onto his little stick and I’m just not sure if that’s going it work.

“I’ve also asked the FA to consider changing the size of the regulation football. My new Aon Villa squad is world class but they do need to play with a ball that is roughly the same size as they are.” 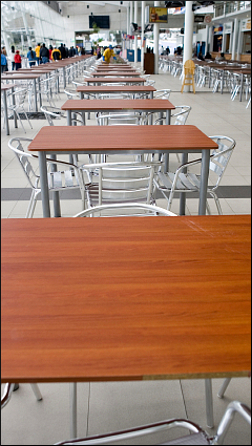 ROCKETING petrol prices mean it is still the only thing at a service station that you can reasonably afford, according to new research.

Professor Henry Brubaker, of the Institute for Studies, said: “However remorselessly the oil companies might be sodomising hapless motorists, they are kindly, tapestry-loving spinsters compared to the blobs of evil, treacly filth that operate the nation’s motorway rest stops.

“Clearly they are businesses, and as such beholden to the principles of free market economics, except that it’s not a free market because they have no competition thereby giving them licence to create these febrile hell-pits peddling the very shittest of the shit at prices that, at first, seem to be hallucinations.

“According to our research most of them used to run old folks’ homes. Shockerooni.”

Motorist Emma Bradford said: “After a long and tiring journey I decided to splash out on some pick’n’mix for my eight year-old son. I believe I got three sickly bananas, a shrimp and a block of fudge.

“‘I ended up having to dance for them and then leave my son there as a deposit. Unless I can find the money by next Tuesday they’re going to sell him to an Irish priest.”

A spokesperson for the Wealthy Break motorway services chain said: “Any issues with individual outlets can be addressed to the manager, whose contact number and gormless, dead-eyed face is clearly advertised by the bogs.

“Or you could always just go fuck yourselves in the rear.”