A DEMENTED albino billionaire is threatening to beam images of a rutting Wayne Rooney into every home on Earth unless he is handed control of the world’s nuclear arsenal.

Oil to telecomms magnate Aldo Fazzenbacker, whose pet praying mantis Ernst is the nearest thing he has ever had to family, issued the ultimatum in a broadcast which appeared simultaneously and without warning on every television channel.

He said: “The tape which I hold in my purple-gloved hands contains images that make John Leslie look like Mrs Potts, the singing teapot from Beauty and the Beast.

“Imagine Rooney’s head turning crimson as he vigorously bothers a bonk-eyed orange tart with the complimentary pillow mint stuck to her left buttock. Then picture him at the moment of fruition, twisted into a hooting, neckless mess of lust that will indelibly print itself into your mind, corrupting all your fondest memories.”

He added: “So far the images have only been viewed by chimpanzees who subsequently pulled each other’s faces off. But unless my demands are met, these are the things you will never be able to unsee.”

Sex tape experts have urged governments to hand over missile launch keys after warning of the so-called ‘Medusa effect’ whereby an image is so horrific that the viewer drops dead on the spot, their face a mask of pure horror, as if they had just watched the Medusa Touch starring Richard Burton.

Teacher Roy Hobbs, from Stevenage, said: “Usually when I hear of a new celebrity sex tape I will grudgingly Google it in an apathetic, modern sort of way.â€

“But faced with this I’d rather build a time machine, travel to the future, film my own death and then come back and watch it every night while I’m eating my tea.

“Then again, it still sounds better than that James Corden sports quiz on Sky.” 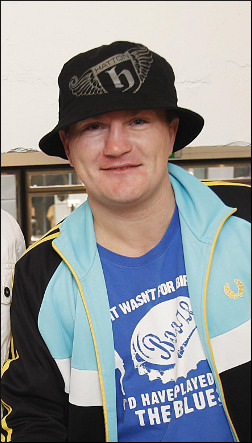 RICKY Hatton has insisted that the whole sport of boxing is geared toward cocaine use, right down to its ruinous affects on nasal septums.

The boxer conducted a three-hour press conference, during which he sweated profusely and repeated himself several times, explaining the theory he had developed over the last three sleepless days.

Hatton said: “You can only focus for three minutes at a time, you need a gumshield to stop your teeth being ground into powder and you spend most of your life telling anyone who’ll listen how great you are.

“The whole thing couldn’t be more gakcentric if it were conducted in a roller disco with the referee dressed as Tony Montana.”

Hatton’s admission has led to suggestions that boxing could be improved beyond measure if both competitors were snorting cocaine between rounds.

Tom Logan, who watched 10 minutes of a Mike Tyson fight in the early 1990s before switching over to a repeat of Duty Free said: “Just the word boxing fills me with tedious dread.

“Snooker is more entertaining. Potted plants are more entertaining. It makes a Radio Four programme featuring Melvyn Bragg and Alan Yentob in conversation about the British novel seem like a jet-powered roller-coaster of pure, naked thrill.

“But the idea of two angry, lolloping monkeys coked to the tits and let loose on each other does sound totally mental and I think it should definitely happen.”

Meanwhile the News of The World’s is to continue its campaign to discredit every British sportsman that has ever lived with the revelation that Sir Stanley Matthews spent every Tuesday night in bed with a duck.