Rugby under increasing pressure to come up with set of rules

RUGBY Union chiefs have been forced to admit the sport is a bloodletting free-for-all that may need some rules.

For decades, rugby fans have maintained the pretence that there is some order to events on the field, but the sport’s governing body has finally admitted it has no idea what is going on.

A World Rugby spokesman said: “Of course there are things players can’t do, like passing the ball forward or decapitating an opponent. Actually, decapitation may be okay, but they definitely can’t throw the ball forward.”

He added: “The referee is basically just there to pick up the players’ teeth and return them after the game.”

Wales captain Alun Wyn Jones said: “I’ve been playing rugby since the age of four and I’ve never once had any clue where the ball is.

“I just roam around in a pack of other massive men and punch anyone wearing a different coloured shirt.” 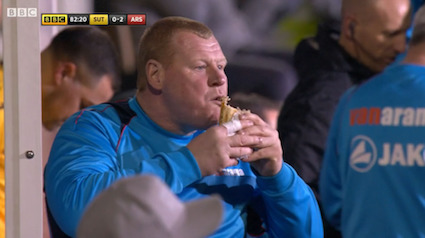 EVEN funny stories about a fat man eating a pie now end in the ruination of everyone involved, it has been confirmed.

The joyful moment in which a porky footballer bit through some flaky pastry in slow-motion, to the delight of millions, has led to his resignation from the club he loves because of the arseholes who run football.

Sutton United fan Norman Steele said: “What happened is some knob-end at a betting company made a shit joke about our reserve keeper Wayne being fat.

“Wayne, who’s a great lad, really dedicated to the club, heart and soul of grassroots football, decided to make it funny by actually eating a pie on the bench, providing the high point of an otherwise pedestrian game.

“At this point the largely impotent FA took out all their frustrations on Wayne by forcing him to resign.

“That’s 2017 in a nutshell. Attempt to have a laugh and get stamped on by po-faced wankers, forever.”

Britain’s next funny story will be about a skateboarding duck, enjoyed for up to eight seconds, before an HGV runs it over.