One in the eye for Europe

The 33-year-old, who has scored 15 goals in 339 appearances, beat Ronaldo and Lionel Messi to be named the best footballer in the world while negotiating a transfer to Derby County.

Ballon dOr judge Denys Finch Hatton said: Only one of the voters had Stephen Warnock top of their list  Bayern Munich manager Pep Guardiola is apparently a huge fan  but he was named by almost everyone for his steadfast workrate and commitment.

And because the Ronaldo-Messi rivalry split voters Warnock was able to sneak in and take the top spot, just like when he scored a wind-assisted goal last February to earn his club a 2-1 victory against Yeovil Town.

Warnock said: I suppose the cream of European football must have noticed my years with Blackburn and Villa, not to mention my successful loan stints with Coventry and Bolton, and decided to reward me with the games highest individual honour.

Now if youll excuse me I need to get back on the training pitch to shout ‘Hoof it forward, for fuck’s sake’.” 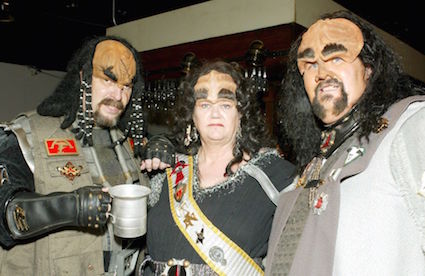 The transition was complete as the last non-Klingon emerged from a public lavatory and was then placed in a laser-cannon and fired into the upper atmosphere.

The city’s name has been changed to ‘Arkmapnak’ and its promotional slogan is now ‘Kirk Marap Koobanak’, which means ‘Kirk molested a spaniel’.

Balak Goprak, the leader of the city council, said: “I challenge you now, Kirk. Come to Arkmapnak, if you have the courage.”

Asked how the city will address complaints over refuse collection timetables, Goprak replied: “Kirk, you and your decrepit comrades will beg for mercy as I wield the Triple Axe of Charkogdok.”

Meanwhile, the city’s football teams have been incinerated and the National Exhibition Centre is now home to the deadly Klingon sport of Pang-Pong.