PREMIER League clubs should stop keeping score so that everyone can just enjoy a nice game of football, the culture secretary Andy Burnham said today.

The minister has also called on England's richest clubs to 'share their wealth' as the government attempts to impose its namby-pamby, socialist bullshit on professional sport.

Mr Burnham said: "It should not be about one team being better, or having more fans and therefore more money than the others; it should be about fresh air and making friends.

"It's only fair that the rich clubs should give half their money to the poor clubs. After all, it is the rich clubs' fault that they are so much better at what they do.

He added: "I'm sure Arsene Wenger wouldn't mind if Theo Walcott's dad took charge of the mid-week training sessions, and perhaps Denilson's mum could wash the kits or bring along some carrot slices and dried apricots for a tasty and nutritious half-time treat."

Under Mr Burnham's plans Formula One drivers will have to use bicycles for the last three laps, while professional darts players must enter into a weight-loss agreement with their local NHS trust before being issued with a licence to handle sharp objects.

Meanwhile England cricketers on tour in Bangladesh this winter will have to live with poverty-stricken local families so that they can gain a valuable insight into the lives of people from different cultures. 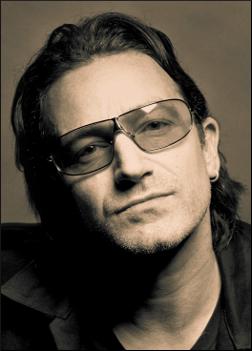 NATO was on full alert last night after pop-shouter Bono threatened to read a 14-minute poem about Elvis on Radio Four.

Entertainment physicist Dr Roy Hobbs said: "The sheer density of po-faced twatishness could strain the boundaries of reality and we could be sucked into a parallel universe where Bono reading out his doggerel on national radio is considered sensible."

Hobbs is working with NATO to avert the disaster by releasing controlled stanzas deep under the Atlantic Ocean. He added: "Listen to this -'You wore a white jumpsuit and feasted on squirrels – As far as I know you never gigged in the Wirral'."

"If that is read out over the airwaves in Bono's unbearbably laid-back yet excruciatingly earnest voice, thousands will die."

The poem, entitled You Were From Memphis, And So Wasn't Jesus was written by Bono in 1994 without any apparent provocation.

Broadcasting regulator Ofcom said Radio Four's decision to air it in full was, 'as reckless as using a threshing machine to brush your teeth'.

Bonologist Dr Wayne Hayes said: "When he did that lyric about a mole digging in a hole, that was pretty bad. But now, with this, he has become death… the destroyer of worlds."