Suarez to sing 'I Will Always Love You' to Patrice Evra

THE Football Association has ordered Luis Suarez to sing I Will Always Love You to Manchester United’s Patrice Evra on Valentine’s Day.

The FA said the move would draw a line under the ongoing race controversy and form the centrepiece of the Association’s official tribute to Whitney Houston.

The row was reignited on Saturday when the Liverpool player refused to shake Evra’s hand confirming recent speculation that he does not think the Frenchman is a very nice person.

An FA spokesman said: “The combination of Valentine’s Day and the Whitney Houston tragedy should remind us all that Patrice Evra is probably telling the truth.

“We have ordered Luis Suarez to learn his lines and then sing the song really, really well. It would be particularly nice if they could have dinner in the centre circle at Old Trafford and then a string quartet would appear out of the darkness and Luis could get up and sing while holding Patrice’s hand.

“Don’t tell Patrice about the song though. We want it to be a lovely Valentine’s Day surprise.”

Kenny Dalglish has backed both the dinner and the song and pledged to once again behave in a manner befitting a Liverpool manager by not winning the league.

Meanwhile, the FA is among dozens of organisations planning a Whitney Houston tribute including Network Rail, Little Chef and the Association of British Insurers.

Labour MP Tom Watson will organise his party’s official tribute and has also called for the Queen’s 60th Jubilee celebrations to be renamed in honour of the tragic singer.

Prime minister David Cameron added: “I will never forget the night I became the MP for Witney, which I now realise sounds the same as Whitney.

Steiner schools blamed for this hat 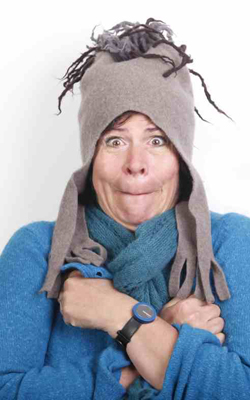 THE Waldorf-Steiner education method is responsible for a piece of headgear that offends all aesthetic sensibilities, it has been claimed.

The hat, pictured right, belongs to a former Steiner pupil and simply should not exist in any rational universe.

So-called ‘Steiner’ schools, inspired by the teachings of 19th-century visionary Rudolf Steiner, are an increasingly popular choice for the type of parents who believe in gnomes and The Guardian.

However they have attracted controversy for a liberal, ecologically-sensitive arts-and-craft-based agenda that encourages quasi-ethnic homemade headwear of the type that could have been designed by a blind smurf.

Nikki Hollis, mother of the offending hat-owner said: “I chose a Steiner school for my children because I felt state schools did not cater adequately for my child’s needs, without realising the effect it would have on their fashion sense.

“They started coming home dressed in dreadful homespun garments, looking like shit ewoks. I also noticed they were developing appetites for ‘world’ music and the type of poor quality dub reggae obviously made by caucasian road protesters.

“I put them back in state school and they’ve since returned to wearing sports casualwear.”

Former Steiner pupil Tom Logan said: “When everyone around you is wearing bad hats, it seems normal.

“I guess you can have too much freedom. Sometimes you just need someone to say, you look utterly ridiculous, Bio-Dynamics is an absurd idea and the Eden Project is a deeply unexciting day out.”