LOUIS van Gaal has vowed to end the cup drought that has seen many fans desert Manchester United.

The club was once a frequent renter of open top buses, but supporters now have to ask their parents what it was like back in April 2013 when it last secured a title.

Fan Wayne Hayes said: “You watch old footage from two or three years ago and wonder whether things will ever be that good again.

“I’ve never experienced what it’s like to win something since I started supporting them in December.

“I know things were very different in his day but if Alex Ferguson could see what we’ve become now he’d turn in his grave.”

Van Gaal has acknowledged the size of his task to rebuild a squad that contains just 25 of the players that helped win the league back in April 2013.

He said: “People think I’m crazy but I think we can win the league next season, if Rafael, Jones, Evans, Smalling, Carrick, Nani, Young, Cleverley, Fletcher, Valencia and Buttner can be replaced.” 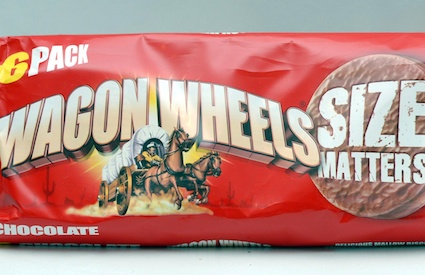 ED Miliband has confirmed his shopping bill is only £80 a week because he just eats Wagon Wheels.

The Labour leader stressed that his wife and children have a normal, balanced diet, but he has eaten nothing but the large chocolate-covered marshmallow biscuits since 1987.

He added: “This keeps the weekly shopping bill down as I can get by quite happily on about £14 worth of Wagon Wheels. It’s a pound for a pack of six and I go through two packs a day.

“I have three with some milk in the morning, because breakfast is important. Then I put the other nine Wagon Wheels in a plastic shopping bag which I carry around all day so I can just help myself whenever I want. It’s good.”

Miliband said: “It’s a lovely biscuit and they are very big – much bigger than Penguins – which means I don’t waste valuable leadership time opening lots of wrappers. But mostly I just love the name. Wagon Wheels.

“My brother stole my cowboy hat when I was nine.”