We Can Win Masterchef And University Challenge, Says Scolari

The Brazilian insisted his squad is strong enough to conquer Europe and, for the first time in its history, take the title of best amateur cook in Britain.

He said: "Frank Lampard has developed the most exquisite game terrine with cranberry jam.

"It will make all other food seem weak and badly organised. Let's just hope he doesn't fuck off to Inter Milan."

He added: "Deco has been working on a marinated rack of lamb in training. It'll get us through the regional heats but it still needs a lot of work."

Chelsea failed to win a trophy last season after finishing second to Manchester United in the Premier League and Europe, and then being edged out by Christ Church College Oxford in the final of University Challenge.

This season Scolari is expected to play Michael Ballack alongside Claudio Pizarro, combining the German's strength with science questions and the Peruvian's ability to identify any country just from looking at an outline.

The former Portugal coach said: "If the league schedule permits I'd love Ashley Cole to have a go at Mastermind.

"There is absolutely nothing that boy doesn't know about Rogers and Hammerstein." 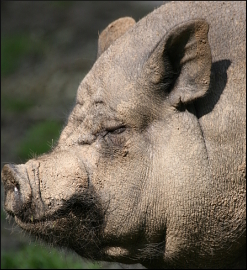 ALLIES of Gordon Brown believe the prime minister will recover in the polls as soon as Britain is hit by a devastating animal disease.

Mr Brown is respected across Europe for his ability to comfort sick farm animals and give them millions of pounds in compensation.

Now Labour strategists believe they can relaunch Mr Brown's premiership by engineering the worst outbreak of pig shingles since 1954.

A Downing Street source said: "We are asking our MPs to go somewhere exotic on holiday, find a sick looking pig and wipe it with a handkerchief.

"They should then place the handkerchief in a sealed plastic bag, bring it home and rub it all over a pig in their constituency."

The source added: "Once the virulent strain of foreign pig bogies starts to spread, the PM will step in with one of his patented animal disease contingency plans, confidence will be restored and our poll ratings will soar.

"We'll have him photographed straddling a well known British pig and riding it around a farmyard while eating a bacon roll."

But despite the pig shingles strategy, Mr Brown's cabinet colleagues continue to plot against him with suggestions the justice secretary Jack Straw is to trip the prime minister so he falls head-first into a bucket of incredibly strong glue.

A senior Labour MP said: "No-one is going to vote for a man who walks around all day with a bucket on his head. He'll have to go."