WIMBLEDON fortnight has begun amid sunshine and the imminent collapse of everything.

Britain is once again pinning its hopes on 2013 champion Andy Murray as he battles Roger Federer, Rafa Nadal and Novak Djokovic before flying to a secret island for millionaires as the rest of the world burns to the ground.

Tennis fan Martin Bishop, from Stevenage, said: “Hopefully they’ll be able to finish the tournament before ISIS arrives at Folkestone or the banks collapse and Centre Court is overrun by a biker gang selling crack and strawberries.

“Andy’s been working with a sports psychologist, which I think bodes well. Oh look at that, my bank’s gone bust and I’ve lost everything. Anyway, I think Amelie Moresmo’s coaching technique is starting to come good.”

Andy Murray said he felt confident going into the tournament, adding: “If I don’t make it to the semis I’ll be disappointed, but also delighted as it gives me an extra day to get the hell out of here.

“I don’t want my last memory of Wimbledon to be watching it burst into flames from the window of a helicopter.”

Getting wasted in tent declared highlight of Glastonbury 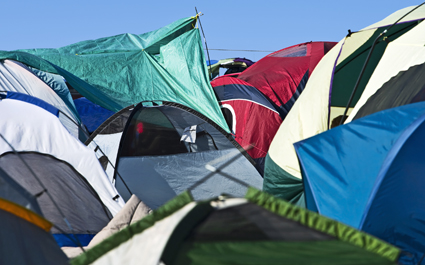 THE best thing at Glastonbury was getting smashed in your tent, it has emerged.

A poll of attendees found that two per cent named Kanye West as their personal highlight, with 11 per cent choosing Lionel Richie and 68 per cent opting for lying around fucked with their feet sticking out of the tent.

22-year-old Nikki Hollis said: “Florence and the Machine were really good, at least that’s what I heard from some people walking past. I was off my tits in my budget Millets tent.”

Student Emma Bradford said: “When you’re at Glastonbury it’s like some of the biggest names in music are in the same field, but it’s a really big field that takes ages to walk across.

“That’s why it’s best to stay sprawled on your sleeping bag getting hammered.”

Cobbler Stephen Malley said: “You could argue that if you’re just going to sit in a tent getting on it, you could erect one in your garden and save a few hundred quid.

“But tent-based carnage is so much better if you’re on a ley line with the distant drums of what could equally be the Chemical Brothers or Patti Smith vaguely audible in the background.”