A MULTI-ETHNIC team descended from immigrants who take the knee at every game are winning the absolute f**k out of this, it has emerged.

The England team, all but three of whom are the children or grandchildren of immigrants, are equally committed to social justice and smashing the shit out of rival national teams out there on the pitch.

Gareth Southgate said: “The lads are living proof that a bunch of Marxist millionaires straight from the Daily Mail’s nightmares are patriots who truly represent this country.

“Look at Sterling, with his so-called gangster gun tattoo on his leg. He loves England more than you and three goals and one assist proves it.

“Or Rashford, who spent the pandemic close season standing up against the Tory for children in poverty. He’s going out there and kicking arse. Laurence Fox? Doing f**k all.

“At the next game, we’re going to be taking the knee in support of the Black Lives Matter movement in front of the entire world and the Queen. It’s everything you despise about deluded millennial snowflakes. In the f**king final.” 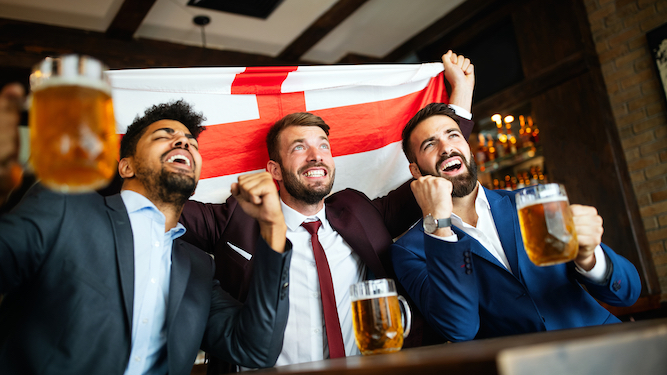 ENGLAND fans have agreed it is necessary to leave work at lunch in order to catch the game at 8pm.

Work will end at around 12.30pm in order to get a solid seven hours’ boozing, fretting and speculating in before tonight’s life-changing event.

Nathan Muir of Cheltenham said: “Usually games like this are in Brazil or somewhere so they’re on at 3pm. It’s hardly my fault this one isn’t.

“I need to get my game head on, and an important part of that is leaving work early like I did for all those other key England games. If I don’t do that they might lose, like they did the other times.

“There simply isn’t time to pace my drinking if I’m only home by five. I’ll rush it and end up blacking out at half-time. This can’t be England-Brazil 2002 all over again.

“And if you need to get a table nailed down in front of a pub then no way can you stay in the office past 1pm. That should count as compassionate leave.”