Paul Dacre institutionalised, 600 of his journalists on medication... 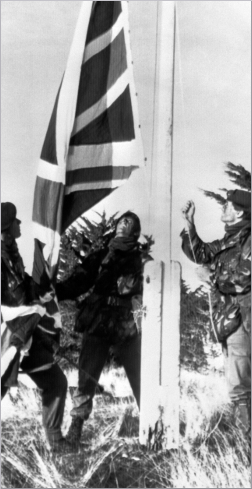 In this comfortingly plausible account, THE DAILY MASH imagines the day the Mail invaded the Falklands.

THE date is July 27, 2012, and in London the Olympic Games are about to begin. For months, the British people have not really been looking forward to it because it’s just the Olympics.

But now that the day is here, the mood feels weird, but good. The crowds are full of excited heptathlon fans, the drizzle pours down. The Union Flags do what flags do when it’s not windy.

Even the nation’s new prime minister, the blinking, stammering Harry Judd from McFly, cuts a jauntier figure than usual. A slim, moderately talented dancing prime minister, for a nation that likes to vote for dancers.

Several thousand miles away, across the cold seas of the South Atlantic, the atmosphere could hardly be more different. For in the capital of the Falkland Islands, the archipelago formerly known as the Islas Malvinas, an angry, foul-mouthed newspaper editor is being bundled into the back of a police car.

Since securing victory in the Second Falklands War, the islands’ defenders  have been busy.

At the tiny airport that serves Port Harry – formerly Port Stanley – a small plastic sign commemorates the fact that all the island’s soldiers are still very much alive. Beside the old Anglican cathedral, draped with a massive banner saying ‘coffee morning!’ the statue of Prime Minster Judd gazes impassively out to sea, because they like Strictly Come Dancing even more than we do.

As the sheep parade triumphantly down Jason Donovan Avenue, a few miserable islanders stand and watch because the Falklands is a rain-soaked hellhole and most people stay indoors for 23 and a half hours a day.

The tragic irony, of course, is that we saw it coming. In our imaginations…

When in December 2011, the South American trading bloc Mercosur (Brazil, Argentina, Paraguay and the Racist Republic of Uruguay) voted to ban boats flying the Falklands flag from docking in their ports, many people said ‘I thought the Falklands were just off the coast of Australia’.

But a few brave souls with fascinating brain chemistry warned that this was merely the latest shot in a diplomatic campaign that, if left unchecked, could turn into outright newspaper articles set in the future.

As far back as February 2010, Daily Mail editor Paul Dacre had begun sabre-tossing over Argentina’s supposedly ‘illegal’ objections to Britain’s probably ‘illegal’ oil drilling off the Falklands. With his mind sunk in crisis and experts predicting a windfall from the oil trees at the bottom of the sea, Dacre was spending most of his time licking his lips very quickly and plunging his hands down the front of his trousers.

Meanwhile, military experts who had been woken up in the middle of the night warned the Coalition that its projected cuts would make defending the islands slightly more difficult than it was when it took about 15 minutes to retake them in 1982.

But to their eternal shame, the Coalition ignored the warnings. And they ignored an even more aggressive bout of sabre-felching from Mr Dacre, who declared that Argentina ‘is a giant stainless steel tarantula whose only weakness is shoes’.

All this, however, was merely a taste of what was to come. For as 2011 neared its end, the Daily Mail editor was keeping a close eye on events in Europe – through a telescope that he had bolted onto the top of Simon Heffer’s gingery skull.

Heartened by the freezing of relations between Britain and its Continental partners, Dacre calculated that the rest of the European Union would never back Britain’s claims to the disputed islands because like many Argentineans, they spoke German.

Indeed, discreet and completely fictional signals from Paris indicated that President Nicolas Sarkozy would look kindly on an Argentine invasion because he wants to kill British children and eat their hearts in a bun. Over Christmas and New Year, Dacre drew up plans about Argentineans drawing up plans.

But while Dacre slept, upside down in a PVC tube, Argentina’s military chiefs said the islands were protected only by 1,000 British soldiers, four Typhoon fighter jets, a warship, and, from time to time, a fucking great submarine that could sink all of their ships and then park itself off Buenos Aires and call them ‘a bunch of arseholes’ with total impunity.

‘Thanks to the cuts, there is little chance that the British would muster an adequate response to the liberation of the Malvinas,’ wrote the country’s principal military adviser. ‘But then of course there’s the submarine which can fire all kinds of shit at us. So, in summary, leave them alone.”

But in a newspaper article from the future in Dacre’s head, Argentine president Cristina Kirchner realised that spring of 2012 would mark the 30th anniversary of the first Falklands War. She like it. She like it very much. Ondelay, ondelay, yeeba!

Indeed, some reports suggested that it was her outrage at Angelina Jolie’s Oscar for Kung Fu Panda 2 that finally made up the Argentine president’s mind.

And with Britain’s economy plunging back into recession, Vince Cable quitting the Cabinet and forming a new political party with McFly and some hippies sitting at the door of your local Carphone Warehouse, Dacre knew the Argentineans knew the time was right.

By the early hours of the following morning, they had stormed the nearby British barracks, asking the soldiers horribly aggressive questions about abortion and firing titbits of gossip about the Duchess of Kent.

In London, the reaction was bedlam. In a packed House of Commons, David Cameron promised he would never stop while Labour’s Ed Miliband told MPs that Britain should not fire a single shot because it was just Melanie Phillips and Richard Kay. And by now, Jan Moir and Baz Bamigboye.

By the middle of April, Mr Cameron had given his approval to the formation of a task force to retake the Falklands from the Daily Mail. But already it was obvious that it was a complete and utter waste of money because Phillips was just a scrawny harridan  in her mid 50s and Kay likes to keep his hair all nice.

Spin doctors ensured that the departure of the flotilla was a good show, though even sympathetic observers found the spectacle of Sir Ian McKellen, who had been roped in to encourage the troops while sitting on an inflatable chair dressed as Gandalf, strangely unsettling.

Meanwhile Britain was losing the struggle for world opinion. Barack Obama, facing a tough re-election battle, promised he would obviously stay out of the conflict, particularly as Jan Moir had not been seen for about three days and Baz Bamigboye was in constant floods of tears.

Most South Americans went about their day but what was brilliant was how EU failed to voice its support for the Daily Mail. Indeed, even before the Task Force had reached Ascension Island, President Sarkozy killed Martin Samuel and then kicked his severed head between the goal posts at the Stade de France.

Then, just days before the Euro 2012 football finals were scheduled to start, Uefa President Michel Platini announced that England had been kicked out of the tournament – because, the Frenchman said, laughing his head off, ‘they are a bunch of Daily Mail reading, hate-filled lunatics’.

And in a sign of the ugly public mood, the Spanish wife of the Deputy Prime Minister Nick Clegg, was subjected to a hail of vile abuse on the streets of London by people who had read a story in the Daily Mail about Argentina invading the Falklands and thought it was real.

In the South Atlantic the Task Force was a pale shadow of 1982. Back then, Britain had a total of 92 destroyers, frigates, attack submarines and amphibious ships. But thanks to years of cuts, by 2011 it had just 33 of these absolutely massive death machines, covered in bombs.

Indeed, plans to send Britain’s nuclear submarines were scrapped when it transpired that Melanie Phillips had by now taken up with a local lad and Richard Kay was directing an amateur production of ‘Les Mis’. But events were soon to take a terrifying turn, because Dacre had arrived.

Nobody doubted the courage or expertise of our fighting men and women and sure enough within minutes of landing in Port Stanley they found Phillips on all fours and Kay screaming at his Jean Valjean, while Simon Heffer complained about the wine and Dacre wandered up and down the High Street wearing a home-made uniform and calling everyone a c*nt.

In the UK the Coalition was in meltdown because, after Cable’s departure, voters realised there was nobody in the government who had been on Strictly Come Dancing. Conceding its lack of a credible democratic mandate the government resigned and was replaced two weeks later by McFly.

In Buenos Aires, cheering crowds poured into the streets because a woman had removed her bra and then let off a firework. ‘Just rejoice at that news’, Kirchner told Argentine television.

Meanwhile, word reached London that Dacre had been talked down from a roof and was now in Port Stanley Hospital while 649 Daily Mail journalists had been placed on medication and shipped to an internment camp outside Watford. News that Prince Harry – who had insisted on serving on the front line – had been arrested after puking all over a tramp on Fulham Road cheered everybody up no end.

For Britain, our economy is in ruins, our national morale is at rock bottom and our reputation is in tatters. And the Falklands Islands are still British.

And on the lonely streets of what was once Port Stanley, the air is cold, the bars are empty and in the night air there is just the lingering sound of the tango as everyone watches the new series of Strictly.