Can I Have My Sixteen Quid Now? Everyone Asks RBS 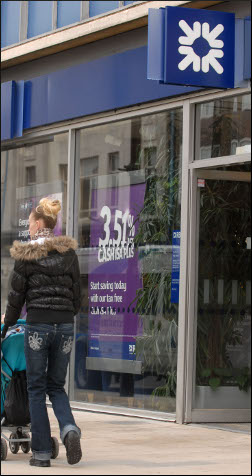 AS the Royal Bank of Scotland unveiled half-year profits of Â£1.14bn, everyone in Britain said they would like their share today please thank you.

Across Britain people were being urged to march into their local branch of RBS or NatWest and demand their bi-annual dividend from the 84 per cent taxpayer-owned company.

Helen Archer, from Hatfield, said: “Can you have it ready by lunchtime? I fancy a Pizza Express Americano and at least three bottles of Pinot Grigio. Four if I’ve got company.”

Emma Bradford, from Finsbury Park, said: “No point in handing it all to the government. They’ll just give it to old people who smell of purÃ©ed meat, or use it to buy more big, daft submarines.”

She added: “I’m planning to spend it on a bathing attachment for my vibrating egg, not that it’s any of your business.”

But RBS stressed that the profits would not be going to either the government or paid out in brown envelopes to anyone who just wanders in and asks for it.

A spokesman said: “After not a lot of thought we’ve decided that it’s best if we hang on to it for the time being. It will eventually find its way into the pockets of ordinary taxpayers, particularly those that sell boating equipment or handmade saddles.”

Chancellor George Osborne briefly threatened to intervene before cowering away like an abused husband and returned to doing the dishes as a single tear ran down his quivering cheek.