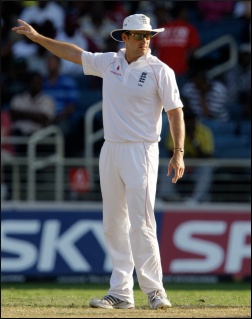 TEN UK tourists on a Carribbean beach holiday have had their trip thrown into disarray after being forced to play cricket matches.

Trip organiser Andrew Strauss has complained to travel firm ECB after being told to turn up and play a series of games that he and his friends are completely unprepared for.

Strauss started badly, with his helmet on backwards and holding the bat upside down, before asking the umpire if you get free cocktails as part of the all-inclusive deal.

He added: "I managed to hit a few of the balls until there was a big commotion and that man in the white overcoat asked me to leave."

ECB chief executive Denys Finch-Hatton said: "All a bit last minute to be honest. Suddenly remembered we owed the Windies a tourney, so I got this bunch of Johnnies to pop over, telling them it was a beano.

"We stuck some pads on them, gave them a jolly old helmet and hoped for the best. What larks!"

Strauss's fellow holidaymaker Andrew Flintoff, from Preston, said: "Bloody 'ell. Ent had time to do 'owt.  By now I was hopin' to 'ave peed off balcony, set fire t'half dozen pedaloes and spewed me tea in t'pool."

Meanwhile other group members are understood to be confused and upset after being forced to cancel a planned ganja-tasting and spend the afternoon having a really hard ball thrown in their direction at 90mph by an angry Jamaican gentleman who seems to have some sort of problem with them.