WITH Britain's turkey population teetering on the brink of a flu-ridden crisis, the public is being urged to eat a badger this Christmas.

Ministers are calling on local communities to organise themselves into roving badger squads to ensure Britain does not starve to death between 2pm and 6pm on December 25th.

Bill McKay, head of Christmas at the department of health, said: "I regret to announce that Britain's turkeys are now minging. Badger though, eh? Not bad.

"Badgers are nutritious and tasty, though I strongly recommend that you get yourself and your children very heavily drunk beforehand."

McKay added: "Badger hunting is a doddle. Main thing is to use the right bait –  preferably a combination of sweet corn, spinach, dead mice and Funky Town by Lipps Inc. They bloody love that."

According to government recommendations badger should be cooked with a meat stuffing such as goose or turkey and covered in a three-inch layer of bacon and marmalade.

"If you put a gun to my head I would probably eat a very small bit inside a cheese toastie," said McKay.

But ministers are facing conflict after Britain's farmers demanded exclusive rights to fatten millions of badgers in tiny electrified cages.

An NFU spokesman said: "Do exactly what we want or we'll spray your houses with shit." 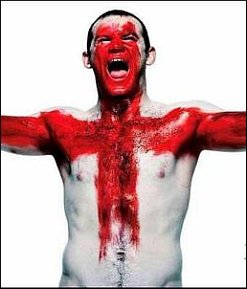 THE wine cellar of Manchester United striker Wayne Rooney is such a total poof, according to rival supporters.

Manchester City fans have ridiculed the England superstar's collection saying it is bland, predictable and filled with 'New World rubbish'.

Wayne Hayes, editor of manchestercitywinelovers.com, said: "Can he tell the difference between a Shiraz and a Grenache? Would he prefer an '83 or an '85 Bordeaux? And why is he such an ugly Scouse twat?

"Darius Vassell has a shed full of ripe, meaty Burgundies and robust whites from the Loire valley, while Dietmar Hamann is an expert in Reisling and Gewurztraminer. And anyone who says different will get kicked squarely in the nuts."

Rooney began collecting wine after his fiancee Coleen McLoughlin returned from a very nice weekend at a Marriott Hotel in the Lake District.

According to friends, Rooney likes to unwind with a glass of Chilean Cabernet. He is also a fan of New Zealand whites and has been known to rub a bottle of Cloudy Bay into a recurring groin injury.

Hayes added: "Rolando Bianchi spent his childhood in the hills above Bergamo, helping out on his uncle's vineyard and acquiring a palate that makes Wayne Rooney look like a fat prick."