Ask Holly: I just found out that lots of people in this country have got absolutely no money

I’m a little bit upset, because I just found out that lots of people in this country have got absolutely no money due to budget cuts or something. Worse than this, apparently hardly any of them have a top hat and tails or access to a limousine, so Christ knows what they do when they attend a celebratory ball. I don’t know which bumbling fool has authored this almighty cock-up but we need to do something ASAP. How can I find the person or persons responsible?

I hate it when you find out horrible stuff like that, it’s not a nice surprise. It happens to me quite a lot. For example, did you know that there’s actually no such person as Peppa Pig? Yes, you heard me correctly: pigs can’t talk and wear clothes and live in houses and be friends with talking wolves and dogs. And they don’t ride bikes and go to nursery and sing catchy little songs round the campfire. No: pigs are farmed and slaughtered and sliced into delicious bacon that gives us cancer and we die. The sooner we all admit this to ourselves, the better. 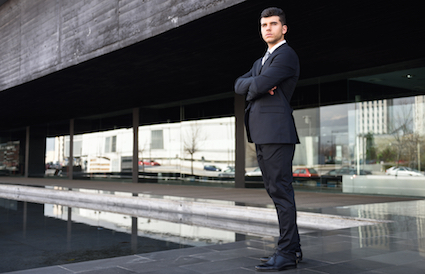 A MAN wearing a business suit feels purposeful as fuck, it has been confirmed.

Stephen Malley, 24, is confident his charcoal grey jacket and matching trousers give him an air of authority as he strides around town like he owns the fucking place.

Malley said: “Clothes make the man, and as you can see, I am wearing some extremely important clothes. This suit underlines the fact that I am an alpha male, and not to be fucked with.

“I stopped at Costa for a takeaway espresso, but I asked for it in an enormous cup, to prove I’m seriously fucking big-league.”

Malley added that anyone who saw his double-vented jacket and his shiny fuck-off tie pin would know at once that he was a no-nonsense risk taker who spent his life outside the box, and would treat him accordingly.

He added: “Some people on the train jostled me earlier, but I let it go because they were wearing suits too, and we in the suit-wearing community will accept physical contact from our peers of equal sartorial status.”

Eyewitness Nikki Hollis said: “Look at that suit. Look at how elegantly it fits his manly shoulders. He must be on his way to a glamorous office full of equally important, well-dressed people.

“I cannot help but feel inferior in comparison.”