HI, I’m an attention seeking arsehole and I’m here to tell you how to write an article about something that you don’t understand that will get you the attention that you so greedily desire.

An eye catching title
Come up with something odd that’s bound to catch some eyes like, ‘Why I’ll never serve fish to a Brexiteer on Friday ever again,’ or ‘Come on Mrs May, show us your real vagina.’ It doesn’t have to make sense it just has to sound controversial.

Controversy
Say you think Trump is doing a great job in a weird and unsubstantiated way. People will then read it and get annoyed but there will be something else for them to be annoyed about 10 minutes later so they’ll just be generally annoyed at the world around them as opposed to any of the shit you wrote.

Fact check (or don’t)
Facts aren’t what they used to be, so don’t worry if it doesn’t make any sense (nothing does). Just make some stuff up and attach some bollocks from the internet. Due to the fast pace of news and information who’s really going to have time to pull you up on it? Esther McVey? Exactly.

Why do you want to write this piece?
If your desire to write is to share an interesting angle on something you care about, just stop right now. Only write so that people on Twitter will think you’re great or a prick but will follow you either way. You might end up getting some odd fame from it that could lead you to getting into the Groucho Club where you might get to drink cocktails with Toby Young. 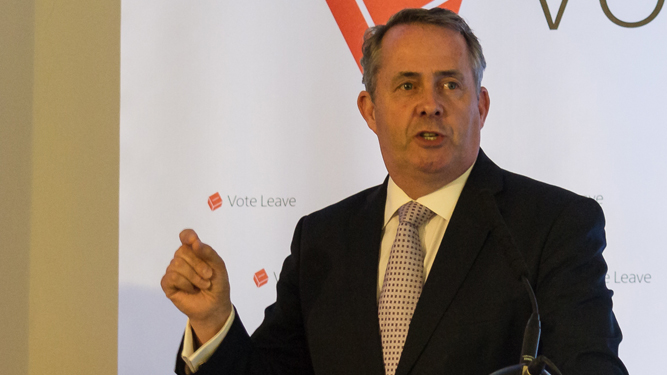 TRADE secretary Liam Fox has signed trade deals worth more than £4.8 billion with countries which do not exist, he has triumphantly announced.

Fox spotted a loophole in EU rules allowing Britain unrestricted licence to trade with fictional countries and has already set up lucrative deals with Ruritania, Freedonia, Zembla and the oil-rich Middle Eastern nation of Qurac.

He said: “The EU might have free trade agreements with South Korea and Mexico, but who’s just got British manufacturers access to all of Wakanda’s Vibranium reserves? This guy.

“I can’t believe I didn’t think of this before. After Brexit we become an imaginary country of marvellous dreams anyway, and this way we’ll already have commercial links with all the others.

“Why bother with stupid old Europe when we can be sending proud British miners to the subterranean cites of Pellucidar, based inside our obviously hollow Earth? Mineral rights already secured.”

Fox added: “Turkish Delight, anyone? I’ve made an absolutely fantastic deal with the ruling monarch of a wonderful, resource-rich country that’s only a wardrobe away.”