What sort of nauseatingly middle-class Christmas are you having?

CHRISTMAS is full of wonderful opportunities to be sickeningly middle class, but what sort of bourgeois poncery is right for you? Read our guide for inspiration.

A Christmas totally dominated by agonisingly trivial conversations about prosciutto and storing aubergines in oil that make normal people want to ram Nigel Slater’s baked marrow up your arse.

Christmas with a strong focus on fun things like ethical consumerism and hand-wringing liberal guilt. Presents should be things like oven gloves made by homeless people showing ‘Mrs Santa’ delivering the gifts in a two-fingered salute to Santa’s oppressive, patriarchal present-delivering monopoly.

Incredibly expensive Richard Curtis film-style Christmas for people who do not realise paying £600 for a tree is insane. Crackers will contain a silver hip flask or Fitbit rather than a cellophane fish that purports to reveal your personality. May also involve skiing in Switzerland and “Portia and Hugo bringing their cellos over”.

Favoured by ambitious parents, an educational Christmas requires it to be turned into a dreary learning experience about random facts like the natural habitat and diet of reindeer and however Anglo-Saxons celebrated it in their huts. Ideally should involve school-style ‘activity sheets’ and a test on Christmas day for extra fun.

No ‘factory farmed’ turkey here, but instead you will enjoy a wild organic goose that was killed non-invasively by being chased around a meadow until it collapsed. May also involve the dreaded ‘nut roast’ and scraping leftovers into the compost heap while chanting a Pagan hymn of thanks to Mother Earth.

Random shit things in a basket apparently a 'hamper' 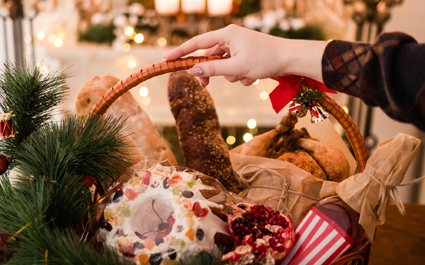 A WICKER basket containing some biscuits and tea bags is apparently a fabulous Victorian-style Christmas hamper, it has been confirmed.

The contents of so-called hampers have left some recipients wondering if they are just a scam to pass off a random assortment of disappointing supermarket items as a sumptuous luxury feast.

Office worker Nikki Hollis said: “A Christmas hamper should be massive and stuffed with traditional treats like candied fruit, cured meats, whatever ‘figgy pudding’ is and a whole goose.

“However when my sister sent me a hamper it was just two bottles of poor quality chardonnay and some horrible Scottish oatmeal biscuits that medieval peasants probably ate just to stay alive.

“I got another from my mum consisting mostly of unremarkable chutney and pieces of cheese. She may as well have just come round and handed me things out of my fridge.

“Don’t get me started on hampers full of toiletries. If you’re genuinely excited about receiving a box of moisturiser and shower gel you should probably kill yourself.”

Accountant Tom Logan said: “I love giving people hampers because they have to sound grateful even if you’ve basically sent them some Asda smoked salmon and Londis jam with fancy labels on.

“This year my in-laws are getting one with three different types of dill and horseradish sauce, which is what I imagine the Devil’s spunk tastes like.”