I WANTED to move somewhere that has a thriving local community, but only until 10pm when I go to bed with some Horlicks and a John Grisham book.

As a lifelong member of CAMRA I am appalled by the amount of pubs closing down in the UK, but not appalled enough to stop being a belligerent arse about people being rowdy when they leave the pub next door at midnight.

You might ask why I bought a house next to a pub when I want to go to bed early, and the answer is because when the pub is shut it looks like a bucolic scene from Last of the Summer Wine.

The illusion is sadly ruined when people stumble out of the pub singing and shouting, some of them clearly drunk. If they would just shut up and stop spoiling the peace then I could get on with living in an old-fashioned version of England where everyone wears chinos and goes to church.

Don’t get me wrong – I’m all for community, as long as it doesn’t inconvenience me in any way whatsoever. But it’s win-win for me because if the pub does shut I can moan about that too.

Is it really so ridiculous to suggest Corbyn is literally Hitler? 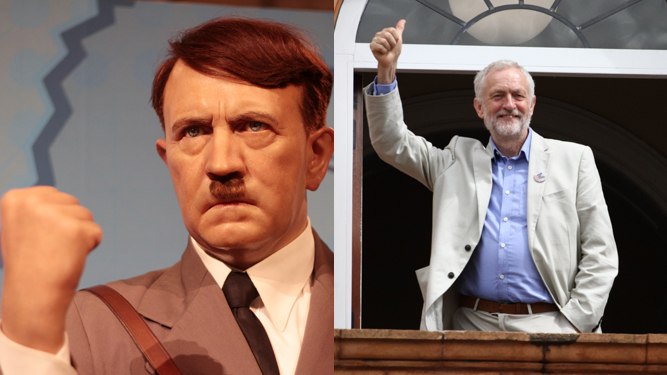 I put it to you that Hitler and Corbyn are the same person. They are both socialists. They are both fanatical anti-Semites with a fondness for hats. Perhaps most damning of all, they are both vegetarians.

Hitler escaped the advancing Soviets in 1945 in a flying saucer and hid in a secret arctic base where he plotted to regain power taking over the Labour Party in 2015.

But, you might say, wouldn’t Hitler be 129 years old and therefore dead? No. The Nazis were known for their experimental technology such as the robot suit worn by Hitler in the meticulously researched computer game Wolfenstein 3D.

My belief is that Hitler’s head was grafted onto a robot body, and thus ‘Jeremy Corbyn’ was born, ready to slake his insatiable thirst for power by becoming MP for Islington North.

As if further evidence were needed, just watch Herr Corbyn at a Momentum rally. The resemblance to the Fuhrer addressing the Hitler Youth is so obvious it barely needs pointing out.

By now you are probably asking, is it time to destroy robot Hitler-Corbyn with a surgical RAF strike?

Yes. And if we’re going to spend the money on pilots and plane fuel we probably should bomb Stonehenge while we’re at it, to annoy the powerful Pagan lobby and also deter foreign tourists. It’s what Churchill would have done.