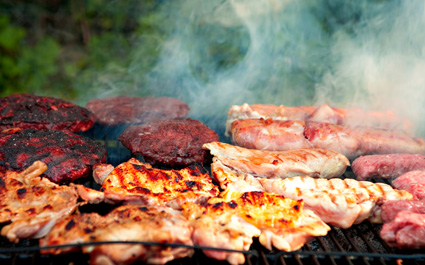 PEOPLE who like barbecues are freaks, it has emerged.

A study by the Institute for Studies found that the popular phenomenon of cooking food on a sooty drum in the manner of a depression-era hobo has little appeal to the sane.

Professor Henry Brubaker said: “You’re basically being invited to stand outside of someone’s house, while the inevitably male host behaves like a rubbish tribal leader, jealously guarding a small fire and rationing out lumps of chicken that are blackened on the outside and menstruating in the middle.

“All because they’re trying to compensate for being born without an anus or some other mildly humiliating dysfunction.

“Probably having access to fire was impressive once, but we no longer live in the era of cave bears and loincloths. There are things called ‘kitchens’ which are impervious to rain and have ample cooking technology to facilitate meal preparation in an effective, non-sooty way.

“Plus, why do you have to bring your own food? What’s up with that? You don’t say ‘I’m having a dinner party, please arrive with a jug of rich creamy sauce’.”

Regular barbecue thrower Tom Logan said: “I love the social aspect, the getting together, also just being able to control something in my life for fucking once, you know?

“Even if my wife and colleagues don’t respect me and I have intermittent erection problems, this is my thing. I am wearing the funny apron, I am holding the tongs.

“Sure you can make minor observations like ‘I think those vegetarian skewers might be done’ but basically stay the fuck out of my way.”